I arrived in the beautiful east-central (now UNESCO World Heritage Site) Slovakian town of Levoča. I was feeling pretty darn good about myself and my backpacking prowess. I was getting used to the weight of the pack, packing and unpacking, finding accommodation and transport. So of course something shitty happened.

Not the “no one will change my Lithuanian Litas” shitty or “I have no money for a public toilet” shitty, but more “the world is full of creeps” shitty.

I headed for the bus stop to go to Spissky Hrad, the largest castle in Slovakia. I was passing through a town gate when I saw a tiny black kitten. I am a sucker for cats, especially black kittens, and I was appalled that someone had abandoned it there. 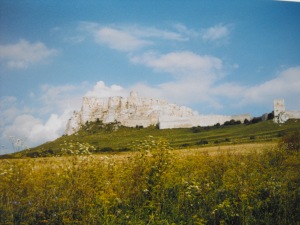 Spissky Hrad is a castle worth seeing

I tried to keep walking, I did, but I just had to pick it up. I imagine on its own it will die, so I wanted to make it feel loved, if even for a short time. I noticed a guy ride through the gate on a bicycle, and then stop just outside and turn around. Out of the corner of my eye I saw him fiddling with the front of his pants, but thought, well men just have to adjust themselves in public sometimes. Then it occurred to me that he might flash me, so I wasn’t going to look.

I was wearing a tank top and had the kitten near my face. The bike guy, still on his bike, leaned over and made some sympathetic noises and started to pet the cat. Suddenly he put his hand down my shirt and grabbed my left breast. I pushed his hand away and shouted “nyet” (or some version of that), slapped him really hard and then kicked him really hard, repeatedly. He rode away pretty quickly after getting himself squared away on his bike.

I was pretty worked up after that situation and had a bit of a hard time putting it behind me. I did continue on to the castle and I remember how very much I enjoyed it. The setting was amazing. I had a lovely meal in a restaurant on the town square. I felt good that I had punched and kicked him, but it was so maddening and troubling it had happened in the first place. I thought if I see him again I am going to chase him down and kick the crap out of him some more. So I spent the rest of the time there looking around for that guy.

Next was the castle town of Trencin and Bratislava, from where I took a boat tour on the Danube. I had great weather every day in Slovakia and it is a beautiful country, but I wanted to move on. 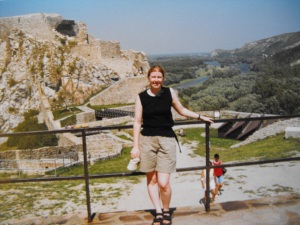 I headed next to Vienna.

Based on a recommendation from a girl at the hostel in Krakow, I stayed in a university dormitory as the students were away for summer break. For about $13.50 I had my own room, very convenient to tourist sites by tram and subway. Fresh from my first operatic experience in Latvia, and feeling like a splurge, I bought a ticket to a Mozart and Strauss concert which included opera singing and ballet. At $28 it was not hugely expensive, but it cost more than any single day in Slovakia and Poland. (I mean in total, everything included from hostel and food, sightseeing and toilets) I also visited the St. Stephen’s Church and the Hofsburg Palace. That was all in one day! On my second and final day I visited Schonbrunn Palace. Once in the morning for the grand tour of 40 of the 1,440 rooms and later to stroll in the gardens. I loved Vienna and despite melting in my un-air-conditioned student room I remember the two days vividly. (I started my first ever Harry Potter book here) Yet given my budget I could not stay longer and go as far as I wanted.

From Vienna I headed next to the Czech Republic. As I had visited with my aunt only the year before while visiting her in Germany, and it being the high tourist season, I decided to skip Prague and see other cities. I went first to Brno, the only city with a bus from Vienna besides Prague. Though I only walked around the old town for three hours while waiting for my onward bus to Telč, I have a memory of the cobblestones and the alleyways.

Brno was nice, but I wanted to live in Telč. I stayed in a pension on the main historic plaza and remember eating a fabulous dinner at a place on the square, sitting in outdoor seating watching people and the sun set. Another stunning UNESCO World Heritage City, Telč was the first city on my trip where I started imagining myself returning to live for awhile. Until I arrived next at Český Krumlov. Český Krumlov really stole my heart.

In Telč I met two German-Serbian sisters with whom I traveled with the next several days. We stayed at the same guesthouse in Český Krumlov and toured around together. The sisters, Zenet and Sami, introduced me to some Czech cuisine they said was much like the food they grew up with. On our final day in CE we took on what turned out to be an epic bike tour through the countryside.

The woman at the tourist agency swore the route we were about to undertake would take only three hours to complete. We set off around 11:40 and the bikes were due back at 6 pm. We also had a bus out that evening from Krumlov to Budejovice in order to catch the bus to Munich. We arrived back at 5:59 pm, our hands, legs, and bottoms very sore. At least 50% of the route was up steep rock strewn hiking trails or down steep paved inclines, which made us go way too fast. We didn’t have good brakes on the bikes so our hands were sore from clutching them. When we returned the bikes the woman told us that usually her two sons, 5 and 8 years old, can make the trip in less than 4 hours… 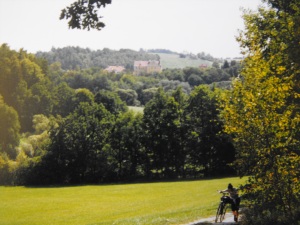 Sami pushing her bike through the gorgeous Czech countryside

I had had no plans to visit Germany on this trip, but I enjoyed the company of Zenet and Sami so much that when they invited me to come and stay with them in Munich for a few days I readily agreed. I stayed in Sami’s apartment while sightseeing around the city. She also gave me a behind the scenes look at Oktoberfest as the company she worked for was involved in the preparations. I was a bit sorry to bid the sisters farewell as I then headed off to Bavaria.

As I had made this detour into Germany I might as well make the most of it, right? I headed on to Füssen to visit the castles of Mad King Ludwig. I visited Neuschwanstein, Hohenschwangau, and Linderhof. The weather was perfect every day in Germany.

At the train station I inquired how I might get to Austria and the information clerk pointed down the street and told me to walk for a kilometer! However, I headed next to Liechtenstein. Just because.

Unfortunately when I arrived there it was overcast and later began to rain. Yet despite being told to give the little country a miss, I am glad I made the trip. It was just interesting to visit such a small country and get a sense of its size and history. It was so green! I climbed up to Vaduz castle and was rewarded with overcast, thought still pretty, views. I was very excited to get the stamp in my passport even though I had to go to a post office in town and pay for it. I might like to come again, though to arrive from the Swiss side and stay another day or two (in good weather) and venture to the other towns, or even walk across the country! It is a mere 6 kilometers wide! 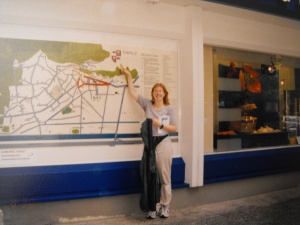 My proof I made it to Liechtenstein