After Greece I took a brief departure from the road; I flew back to the US for a week with family and to attend my high school reunion. That was a bit weird but I did win two prizes: 1) voted “most cultured” and 2) the person who traveled the furthest distance to participate.

After my brief trip back “home” I had a little trouble getting back into backpacker mode. I haven’t completed changed over to travel mode again. In my brief stay in the States, I think I became too accustomed to the idea of life there again. I watched a television mystery that was part 1 and 2 of a 3 part series, and I will never see the rest. I hardly remember what it was about and my life will go on fine without knowing, but it added to the disjointed feeling I have. At any rate I have found myself on the road again and I warm to it more every day.

I got this close to Pope John Paul II

Italy. It was a great way to start off the next phase of my journey.

I started in Rome, where the first thing I did was head down to the US Embassy with my absentee ballot to vote. I visited all the must-see sights: the Pantheon, the Trevi Fountain, the Spanish Steps, the Boca di Veritas, the Vatican, and the Roman Forum. I was outside the Coliseum but unfortunately did not feel well enough to go in—this was the beginning of my health issues, though I did not know it at the time. 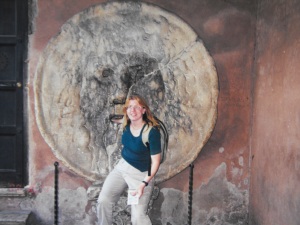 If you were wondering, I still have the hand. Bocca della Verità, Rome.

Despite the beauty of Rome, what I remember most vividly was meeting the American former Peace Corps volunteer at the hostel who had been forced to leave the Solomon Islands coup and while walking back from the Colisseum with Liz from the hostel, a gypsy child tried to run off with her bag.

San Marino, one of the smallest nations in the world. Beautiful.

I traveled with Liz to Pisa for the requisite photos by the Tower and then on to Florence, where we tired ourselves out walking the city to see the sights and searching for the best slice of Italian pizza. I found it enjoyable to travel with someone a few days, the first since my escape from Romania. Yet after five days, it was time to strike out on my own as I headed north to Bologna, where the weather kept it a short visit, and then on to Rimini.

Rimini was my stepping stone for a visit to the Republic of San Marino, one of the smallest countries in the world. Despite its size, I remember the day was bright and warm and walking along the steep and winding cobblestone streets. No tour. Just a public bus from Rimini to San Marino and then back, with three hours to soak in the history and pick up my requisite passport stamp, postage stamp, and coins.

Then on to Venice. I stayed here for only two days. Italy was expensive and Venice was one of the most expensive places in Italy. Twenty dollars an hour at the Internet cafes was plenty reason to never log on. The weather did not favor me here. Mostly it was overcast though it rained once, hard for some time, and I had the opportunity to stroll through a St. Mark’s square filled with water. The city was beautiful with its iconic bridges, narrow streets, and of course canals. Besides the pervasive underlying smell of the water and a wonderful Italian pizza dinner at an outdoor café by the water, my strongest memories are visiting a glass blowers shop on one of the smaller islands and my hostel. I stayed at a women’s lodging on the island of Guidecca run by nuns. This hostel was reached only by water taxi, not too many places where one can say that. My bed was one of 50 in a single room. They served a simple breakfast and the curfew was strict, 10:30 pm. At that time an old nun, dressed in traditional garb, would enter the room and say in English, “Good night girls” and turned off the light. 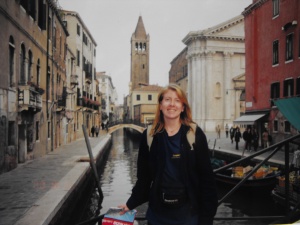 Venice was beautiful and pricey. Worth it!

From Venice I headed to Milan with a stop in Verona to visit the old castle, the cathedral, and of course Juliet’s house. Milan was just a stopover itself before heading to Genoa and then to Monterosso in the Cinque Terre. It was here, walking through one of the villages, when one of my most improbably travel meetings occurred. While walking to the train station I passed a woman I could have sworn was GM, who had stayed in the same room as I in the hostel in Skopje, Macedonia. I called out her name and sure it enough It was her! So we spent the day together and had a great time. We wanted to walk along the Via della Amore that linked the last two towns, but it was blocked with a high spiked fence due to recent landslides (there had been a locked gate and a fence on an earlier walk but we had easily circumvented them. We squeezed through the gate and swung ourselves over a cliff face to get around). We had a lot of time to talk while waiting for the train between the towns. Given the towns were small it seemed not many trains stopped there; three zoomed past without stopping. It grew dark and the next train scheduled to stop was in four hours. Luckily a random train stopped and picked the few of us stragglers up and we made it back to Monterosso.

I did not go in I swear.

Then it was time to go south, way south to Naples. I caught the train to La Spezia and then to Naples seven hours later.

The weather in Naples that early November was perfect. The views of Vesuvius were amazing. The trip to Pompeii was somber and engrossing. The historical sites were wonderful. The pizza was delicious. But I did not like Naples. First, there was a trash pick-up strike and mounds of garbage bags were piled up in several locations. Second, the harassment. Whenever I left my hostel I was exposed to the catcalls, the whistles, the stares, and being followed by men. I felt hunted and stalked. The first day when I had been traveling with a fellow male traveler I had been left alone, but once he had departed and I made my way around on my own, the harassment began.

Pompeii. Amongst the ruins of the dead, I mostly found the peace I needed from the harassing streets of Naples.

I remember even walking along the road near the waterfront in the direction of the train station and my hostel, a car slowing down alongside me. I do not remember if the driver spoke to me or not but I recall the feeling of dread, particularly after the car drove off and then I watched it make a u-turn, speed down the adjacent street, and then turn to return to drive alongside me. I began to hate Naples and was happy to leave for Sicily.

Next stop Syracuse. It may have been the most classical and beautiful city I visited in all of Italy. The wide clean streets of the historic area were a pleasure to stroll along and such a relief after the gritty and illicit feel of Naples. I wished though I had visited Sicily earlier in the trip because by that time I had become fatigued by Italy. I was tired of the prices and, believe it or not, tired of the pizza. But most of all tired of being harassed. I traveled out to a Greek amphitheater where I sat at the top of the stone seating and reveled in the historic beauty and in being on my own. I saw two young Capuchin monks at the train station, sitting together on a bench, the hoods of their brown robes shielding their faces. I rather wished I had such a robe. I then headed to Catania where I had a day of sightseeing before heading on to my next destination. I love history and culture and Italy is beyond rich in these. Italy is beautiful, but it also took its toll on me and I was glad to move on.