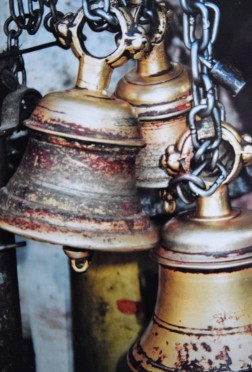 One of my favorite pictures from the trip: Temple bells.

As part of my blog I am adding edited excerpts of stories I wrote on/of past travels.  I have been thinking a lot on the person I was before I joined the Foreign Service.  The person I was before I became a mother.  My by-the-seat-of-my-pants travels, the ones without hotel reservations, the ones where I carried everything in a single mid-sized backpack, the ones where I stayed not in hotels but in shared dorms or cheap guestrooms, sometimes with shared facilities, sometimes without hot water.  The trips where I would walk for hours instead of taking a taxi or tuk-tuk or rickshaw that I thought cost too much.  The trips on which I might wear the same pair of pants or shirt for days.  I sometimes really miss those footloose and fancy free vacations.

Still I am, and was, a planner.  I poured over maps and guide books, train time tables and bus schedules.  Once on the road things could change.  If I arrived somewhere and I did not like it, I could leave a day earlier, even that afternoon, off to somewhere else.  If I liked a place a lot I would stay longer.  But I still had a very good idea of what I would find in any given place.  I was prepared.  Yet my 2002 trip to Nepal is the least planned of all my trips (except maybe that time I went to Albania).   I always wondered if I could be one of those people to show up at an airport and simply buy a ticket and fly to anywhere same day.  This is the closest I have come.

Look at those snazzy hiking pants!  One of my first acts in Kathmandu was to buy two pairs.

I was a graduate student in Singapore and we all had one week off between classes and our exams.  I wanted to get away, out of the country.  I decided to fly to Thailand.  Inside my bags I had my class notebooks.  My plan was to sightsee during the day and then study for my exams in restaurants and in my guestroom in the evenings.

After a day in Bangkok listening to the thumping sample CDs competing with the bars and restaurants on Khao San Road, I knew Bangkok was not the place I wanted to be.  The day before, I had met a Japanese rafting instructor who was on his way to Katmandu.  I had been considering going to Brunei, but who goes to Brunei for a week?  So I went to one of the Khao San Road travel agents and instead of asking about a ticket to Brunei I asked about Kathmandu. A day later I was on the plane.

Now about 30 minutes before landing at the Kathmandu airport I am wondering if this trip was a good idea.  For one thing, I have no guide book.  For another, I have no cool weather clothes with me.  The pilots just announced the weather is in the 70s.  I look around the plane to see the majority of people dressed in khaki pants, long sleeved shirts with pullovers or jackets and hiking boots. I look down at my own knee length skirt, a short sleeved shirt and sandals.  I have one jacket in my checked luggage.  The flight attendants hand out the customs forms.  One question asks me to declare how much currency I am bringing into the country.    I realize I have about US$50, (US$30 is to cover the cost of the visa on arrival) and 50 Singapore dollars. I cannot recall if Kathmandu has ATM machines. Thailand has them on every street corner so it had not occurred to me.  Until now. 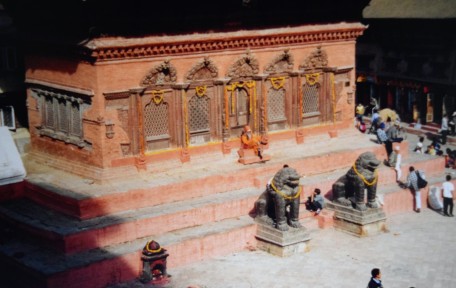 I sought calm and inspiration in Durbar Square.  I am not sure who I liked more: the uber cool Sadhu chillin’ out at the temple, or the young man just below him staring up in rapt attention

But it was enough.  I bought some pants, found a place to stay, and have managed. It turns out there are two ATMs in Katmandu, although I was in a bit of a panic when I went to the first outside of the Kathmandu Guest House and found it out of order.  However the owner of the Thamel guesthouse where I found a small, quiet room on the third floor with a wooden desk perfect for studying and a window that looks out on a busy pedestrian street, told me not to worry and to just pay him the following day once I located the other ATM (which thankfully worked because it turns out that the banks are closed for two or three or four days for a holiday).

I am so glad to be here in Nepal.  I love the atmosphere.  I am a bit envious of all the people I see heading off or returning from treks.  There is the excitement of starting something so amazing and the uncertainty of whether one will be able to complete the trek.  Then for the returnees there is the joy of accomplishment, of having the smiles and pain and blisters and stories about the journey.  I spent some time last night with some women about to head off on a two week trek to Everest Base Camp, and how much I longed to bunk my exams and head off to the hills.  I think they would have made lovely companions.  But as spontaneous as I can be on travel, I usually remain practical. No, this trip is just for a week. 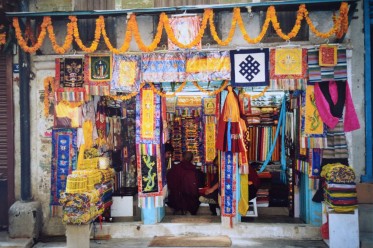 Festive colors for Diwali and the Newali New Year

I feel lucky to have come to Nepal at this time even though I had not planned on this trip.  It is a week of celebrations.  First, it is Diwali.  The streets are full of lights.  Candles and carpets of yellow flowers lie at the entrances to many shops.  Groups of children are caroling from door to door for tika, a blessing and a small amounts of money.  Tomorrow the boys will receive tika from their sisters. They give a small present to the sister, who will then give them some small amount of money.

Today Kathmandu Durbar Square was full of holiday makers buying fruits, flower garlands, and new clothes for the occasion.  The last time I was in Kathmandu, although there were certainly people in the Square it was more of an oasis from the crowded narrow streets, but today the Square rivaled the streets in energy and raucous noise.  It was rather wonderful. On the way to the square I was blessed by a Sadhu, who planted a tika on my forehead, put some flowers in my hair and doused me with holy water.  I returned the favor with a “donation.”

It is also the Newari New Yea.  At first I was a little confused.  New Year?  I thought it was New Year the last time I visited Nepal, in April 2001.  And it was.  Then it was the Baishakh New Year 2058.  Now instead it is turning 1132.  What luck to always turn up during such celebrations.

I felt pretty blessed to receive “tika” from this happy fella

streets and restaurants, I can sit and study in a cafe enjoying a cup of Nepali tea or in a Kashmiri’s shop having lemon tea, do a little studying, but still enjoy a different atmosphere..  It feels just right.  I hope I feel the same after a week (or even tomorrow because I tempted fate by having dinner in the same restaurant that A&P had our last dinner together the last time I was in Kathmandu, and the following day I was extremely ill.  I sat at the table beside the previous table.  I think I even had the same surly waiter!  But it was a delicious meal then, and it was tonight too.)

I am growing a bit tired. Although it is just 8:45 Nepali time, it is 11 pm Singaporean time (Nepal doesn’t like to have the same time as India, so it is 2 hours and 15 minutes different from Singapore).  It’s time to head back to my hotel and sleep.  I want to get up early tomorrow and head out sightseeing.