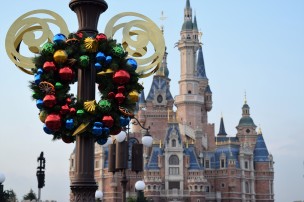 I am a convert.

As a child I liked Disney well enough.  I liked the movies, the songs,  the Happy Meal tie-in toys.  But it was not until I had my child, and really since we moved to Shanghai knowing the newest park would open here, that I came to love Disney.  Since moving to Shanghai we have visited Disney parks in Florida, Hong Kong, California, and Shanghai.  I am already planning to visit Disney World again on my next home leave, and I know at some point we will get to Tokyo and Paris.  We move next to Malawi, which is a long way from any Disney park and yet…Paris is the R&R point for Malawi and my daughter already talks of Paris–two of her favorite Disney movies, The Aristocats and Ratatouille, are set there.

Right now my daughter is at an age where Disney is particularly magical and I am so grateful to be in Shanghai at this time and to be able to give her these experiences.  I do not acknowledge it enough, but we are extraordinarily blessed to live this lifestyle.  And here we are living someplace we can reach a Disney park within 75 minutes of leaving our apartment.  Just over an hour door to door.

Back in June we had our first two experiences with Shanghai Disney during the trial opening period.  We had a really fun time.  I had been plotting our return for some time.

The next chance came – Disneytown, the free retail and dining area outside of the park, held a Halloween Carnival the last weekends of the month.  Things were pretty busy in October for me and the weather left so much to be desired (wet and overcast); however, on October 29 the weather cooperated — cool and overcast but not raining–we would make the trip.

We would be there too early for the parade and trick or treating would only happen on the 31st (a work day), but we enjoyed the decorations, the photo booth, and the shopping.  C just likes any excuse to go into the World of Disney or LEGO store.  Me, I like just about any excuse to eat at the Cheesecake Factory.  It is the first location of the popular chain in Asia.  Since it’s opening in Disneytown I have eaten there 5 times (on every visit to Shanghai Disney)–I think that is more times than I have ever eaten at the restaurant in the US!   At 4 pm C and I caught a Disney Halloween stage show complete with appearances by Mickey and Minnie.  I saw very little of the show due to the size of the crowd, but C on my shoulders claims to have seen it and pronounced it “great!”

The Lion King in Mandarin is riveting

A few weeks after Halloween a friend suggested a mommy/daughter date to see the Lion King.  The first ever Mandarin-language production of the stage musical is currently shown exclusively at the Shanghai Disneyland resort theater located in Disneytown and in November tickets were discounted 30% to celebrate the 19th anniversary of the Broadway show.  C and I met ST and her daughter M outside the theater.  C had not seen the movie (it is currently in the Disney vault and I am not willing to shell out the $104 the DVD is currently selling for on Amazon) but I had explained the plot line.  Well as much as I could  explain such a thing to a 4 year old, especially since I too had not seen the production in over 10 years.  And it would be in Chinese.  Though C takes Chinese at her preschool and talks daily in the language with her nanny, I am never quite sure how much she understands.  I should not have worried.  The show transcends language and C seemed to understand enough, asking me a few pointed questions during the performance, but loved it enough to clap loudly, cheer, and be found humming the songs since.  We finished up our day with, no surprise here, a late lunch at the Cheesecake Factory.

For Thanksgiving we, along with several of my colleagues, made our way out to Disney to enjoy the holiday.  We arrived on the Wednesday evening so we could enjoy two nights at the Toy Story Hotel.  I bought only a single day park ticket for C and I while the others bought two day passes.

Left: The entrance to the hotel.  Center: Woody and Bullseye great us on the seventh, and top, floor.  Right: A view of our comfy and fun room.

I loved the hotel.  All the little accents like the giant marbles used to decorate the front of the front and concierge desks, the Slinky Dog drawing on the ceiling light in the room, the Toy Story character inspired carpets, and the giant ABC blocks that served as pillars outside the main entrance.  It was whimsy and fun, just as Disney should be.  I also had the best sleep I had had in over a week. 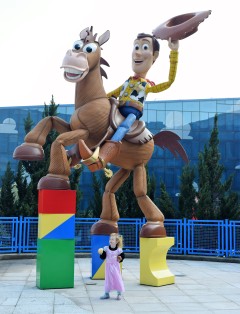 A cold random Thursday in November meant the park was not at capacity.  We lucked out that the fierce wind, overcast skies, and occasional rain of the day before gave way to blue skies and sun.  It was still a chilly 38 degrees in the morning, but it warmed to 50 for most of the daylight hours.  C and I met our friends at the park entrance and headed together to ride Soaring Over the Horizon, only a 30 minute wait.  I have heard the video in Shanghai has now become the gold standard and is now in all the parks with this ride (Epcot and Disney California Adventure).  C was now tall to ride and she quickly declared it her favorite (“Mom, let’s go ride it again next week!)  After Soarin’ my friends sans children (i.e. everyone but me) headed off to Tron and Pirates and other adult favorites while C and I headed to Fantasyland to ride the Hunny Pot Spin and Peter Pan’s Flight, with only a 5 minute and 20 minute wait respectfully.

We had lunch at our usual spot in Tomorrowland.  Unfortunately for me the park does not sell Diet Coke but rather Pepsi Max and the only place to buy it is in the Stargazer Grill.  Yet it was warm.  Why?  Because Chinese people do not like to drink cold beverages in the cold.  Sigh.  I asked how many Chinese people even buy diet soda and was told almost none.  They tried to accommodate me and brought my Pepsi Max bottle to the table in a fancy metal ice bucket! That was my lost in translation moment when the Chinese characteristics took over.  (I think it would not be Shanghai Disneyland without one)

We rode  Buzz Lightyear Planet Rescue and C really enjoyed it this time.  There was just a 10 minute wait!  Such a difference from last time when we waited over 45 minutes and C hid under the game console for the first minute of the ride.  We were first in line for a photo with Stitch.  We visited Marvel Universe and had only a short wait to take photos with both Spiderman and Captain America (the first C was very enthusiastic about, the second, well it looked like she was headed to the gallows while in line, but she agreed to the photo anyway).  There was a 20 minute wait for C to Become Iron Man.  We stood front row along the parade route and also had an unobstructed view of the Golden Fairytale Fanfare review in front of the castle.  Oh the things I had missed on earlier visits!

C only made it to 5 pm, which in my book is pretty good for a 4 year old.  Because honestly the 4 year old’s mom was not sure how much longer she would make it.  We topped off our visit with C selecting a Thanksgiving Day gift (um, what?) and Cheesecake Factory (of course!).  Back in the hotel C could not decide between Ratatouille or Mulan of the free Disney movies on offer and so watched a little of both.

On  Friday morning we took a “yes, we were all here” photo with friends in front of the Toy Story hotel tree, which looked as if it had been made with Tinker Toys and ABC blocks.  Then we headed off on the shuttle to the Shanghai Disneyland Hotel, the fancier and more pricey of the two. While the Toy Story Hotel has only food court and convenience dining options, the sit down and character meals are at the other hotel.  There, at Lumiere’s Kitchen, one has the chance to meet Mickey, Minnie, Pluto and Goofy and dine on beautifully displayed Chinese and Western food options.  C only wanted the character pancakes, fruit, and time with the characters.  Again, the dining room was not at capacity and we had lots of opportunities to mingle with our Disney friends.

After breakfast it was back to the hotel and then a walk to the Disney Resort metro station.  I love that we are so close to the magic of a Disney park but almost as soon as we head through security at the metro station I begin to miss the park and even sort of dread returning to the real world.  I guess that sounds melodramatic, but I felt something like that all the same.  The magic lasted just a bit longer though as we lucked out boarding one of the few Disney inspired metro trains in service.

Later in the weekend we went to see the just released Moana. (That sounds easy enough, but seeing a US movie in China is not so straightforward.  The Chinese government allows only 34 foreign films to be shown in theaters each year.  That is 34 foreign films, not just US films.  Though most animated Disney films destined to be blockbusters are usually given screen time, sometimes it can be weeks after the US release.)  It was a wonderful movie and a great way to top off our holiday weekend of Disney.

Maybe there is time for one more Shanghai Disneyland visit before we leave?

Left: Our amenities from the Toy Story Hotel (the toothbrush tin is so fabulous).  Center: Our tickets to the park issued at the hotel.  Right: A view of the Disney metro train blissfully free of crowds!