I am packed out!

[Note: the maximum for HHE is 7,200 pounds and will be shipped directly from Shanghai to Malawi.  I expect to see our things again in 5 to 7 months.  The maximum for UAB depends on the number of family members.  C and I get a total of 450 pounds and we will have one UAB shipment to the US and then later another to Malawi.  So we should see the UAB again in 7 weeks.]

Just one of the many lies to myself: I am ready (I called this ready?!?!)

And then on the fated day, at exactly at 9 AM, five packers showed up and suddenly packing was happening left and right and all around.  I had been told that the UAB would be packed first, weighed, and if there were extra room I would be able to put in more.  But the five packers fanned out – one in C’s room packing the UAB, one in the kitchen, one in the guestroom, and two in the living room.  I was so NOT ready.

I found myself sitting on the floor of my bedroom next to a pile of paperwork that had accumulated over two plus years.  And in ten minutes I made short work of it.  It had sat there for two years…. Then in the midst of my dealing-with-papers moment I gasped and jumped up — I had not cleaned out the desk in the guestroom! And sure enough my checkbook had been packed.  Luckily it had just happened and the packer expertly sliced open a nearby box and released the item in question.

[For some of you out there you might be scratching your heads.  A checkbook? you ask.  Hello?  It is 2017.  What are you doing with a checkbook?  I write one at least once a week to the Consulate cashier to get cash.  No joke.  Welcome to life in the Foreign Service.]

Around 2:45 in the afternoon I lay like a wet potato sack on the floor of my bedroom.  My poor little introverted heart just wanted to be alone.  The head mover popped his head in my room and asked me to take a look around to see if there was anything else.  I squashed my first instinct to simply tell him I guessed they did a great job and could they just now leave, and instead took a look around.  I found TEN drawers that were still full of things! 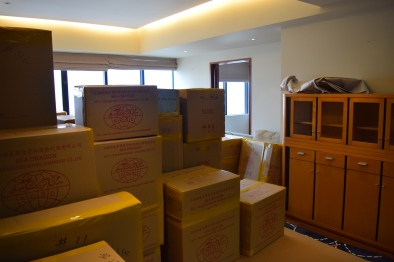 As the packers began to pack up those nearly-left-behind things I started to wonder about my cat.  I have two.  One, Kucing, hates to be held but loves to be near people.  She had been quietly observing the chaos, taking it all in.  When a mover got too close she retreated and after a decent interval returned for observation.  Tikus however had made herself scarce.  An hour or so before I had found her wedged inside the underside frame of the love seat.  However, when I went there to look for her later she was not there.  I could not find her anywhere.  I did find one of the packers had cracked open the window in the guest bedroom.  The window where Tikus, on the few occasions she is allowed in that room (or sneaks in), likes to sun herself.  I found myself wondering if she had climbed out in her terror…  I will remind you we live on the 19th floor.

One freaked out cat wedged inside a love seat frame.  Good thing the furniture was not packed! (it belongs to the apartment)

The movers helped me lift up the bed in the guestroom and guess what we found?  No, not the cat.  But, we did find several more things that needed to be packed — long, slender, carved wood fabric hangers from Indonesia and Thailand.  One is about 5 feet long; there was no way it would fit in my luggage.  While some movers got to packing those items the others helped me lift up the master bed where wedged back against the wall was my hiding cat.  Whew!

In all the movers packed 91 boxes of HHE–  a net weight of 3,250 pounds (my stuff) but a gross weight of 4,100 pounds (including the packing materials) for HHE.   I cannot wait to open the boxes on the other side and find my treasures — things like the Pizza Express menu I know was inadvertently packed.   That will surely come in handy.

Afterwards we were left with a very quiet, very sparse and soulless apartment.  With a four day weekend ahead I  made a spur of the moment decision to book us train tickets and two nights in Suzhou.

I had thought about heading back to Hangzhou as our first trip had not been all I had hoped for.  However, I had been waiting to see if a schedule would be released for the lakeside water play created by famed Chinese director Zhang Yimou (I love his movies).  At last the website announced the play would resume in May…too late for us.  I was interested in a visit to the tea museum but it was not enough draw for me.  Friends had recently traveled to Suzhou and one had suggested I go there.  Initially I said no.  I had visited way back in 2002 and I felt fairly certain that a bunch of hundreds of years old gardens were not going to hold much interest for C.  Yet the more I thought about it the more keen I was to go.  I drag C to all kinds of things after all.

The view across Jinji Lake from our hotel

As I hustled C in the stroller and a suitcase to the train station and on the train I had my doubts, but once we arrived in Suzhou I knew I had made the right decision.  The weather was perfect — warm and sunny with blue skies, something that can be quite rare in China but especially during the rains that bring spring blossoms and Suzhou was bustling and alive with the holiday crowds.  From the train station we headed directly to our hotel, checked in, and then headed right back into the historic part of town for lunch.  Next stop was the I.M. Pei designed Suzhou Museum.  I loved it.  The beautiful museum focuses on the art and artifacts of the Wu Culture, of which ancient Suzhou was the capital.  The museum was small enough and with enough interesting things to keep 5-year-old C entertained (the courtyard with traditional zigzag bridge over a pond with carp certainly helped) and plenty of superb pieces to make my little-museum-lover-heart sing.

My favorite at the Suzhou Museum (C asked if I would buy this for my bedroom — HA!)

From the museum we visit the Prince Zhong Mansion, then took a break to snacked on some dumplings and then headed to the Humble Administrator’s Garden, the largest and most famous of the UNESCO World Heritage classical gardens of Suzhou.  This is where the joy of the holiday crowds diminished as hundreds (maybe thousands) of Chinese crawled over every corner of the not-really-that-humble garden.  It was a struggle to push the stroller over the garden walkways (whether C was in it or not).  The garden is huge! Luckily C likes flowers and ducks and Chinese gazebos and there were these in spades in the garden.  We then visited the Lion Forest Garden.  Yes, another very large rock and foliage and Chinese feature garden, with a 5 year old.  And she loved it!!  The Lion Forest Garden has a large stone maze-like area.  I did not want to climb all over the rocks but C did.  She begged me to run through it.  And so, in an unexpected moment of trust parenting I said she could all by herself for five minutes and come right back.  And she did — so full of accomplishment of her adventure.

But then we were done with gardens.  Well, C was.  I wanted to see more.  And it was here when I really began to feel keenly our departure from China.  I was nearly done with my Shanghai bucket list but had hardly scratched the surface of the China bucket list.  Suzhou alone deserved a week so I could visit all the gardens (there are nine primary ones though over 50 in total) and pagodas and temples and more.  I wished we had longer; wished we could back a following weekend.

But we did not have that kind of time (or energy) so instead we headed back for some mommy-daughter time at the hotel pool.

For the second day I figured we could visit one of the old city gates, visit one or two maybe three gardens, see the twin pagodas and maybe head to the Tiger Hill area.  Clearly WAY too ambitious and an indication that I still struggle with our sightseeing limitations.  The Pan Gate scenic area did not appear that large on the map, but that was very deceiving.  There was a pagoda and a small lake full of carp and gardens and bridges and finally, in the back, the gate itself connected to the old city wall.  We were there over two hours!  It might have been three.  We had to climb the pagoda, take pictures by the small lake, take pictures with the scenery, buy fish food to feed the carp, have some ice cream, buy more fish food to feed more carp, move to another location to feed more carp some food we were saving, take a picture on a bridge, take a picture of C practicing Tai Chi (this is what she said she was doing; I had my doubts) and finally make our way to the Pan Gate.  I imagined what it would be like living in Suzhou and coming here during different seasons. C, clearly in awe of the historic and architectural significance of the gate, turned to me and said, “Can I have a hot dog now? I saw a human eating one over there.” (to 5 year old C human=grown up)

I thought to walk from the Pan Gate scenic area to the Master of the Nets garden and then lunch, but was too overcome by hunger and C’s increasing frustration about her lack of a “hot dog” (its really a Chinese sausage on a stick) to stop for any length of time at a garden.  So we pushed on (or well I did, literally, C sat in her stroller) to the pedestrian walking street of Guanqian Jie, in the very center of old Suzhou, where literally (well, really my own rough estimate) about a million Chinese had descended for the three day holiday weekend.  Yet despite being a street for thriving modern day shopping and dining there also stood century old shops and an even older Taoist temple.  C made it clear that if there were no hot dogs to be had then she wanted some of the dumplings she had the day before and under no certain terms were we to go into any temple.

My once (and future?) backpacking heart crumpled just a little bit but my mommy heart won out.  I searched high and low for dumplings with no success but did find us some delicious crab-apples covered in what appeared to be donut glaze to tide us over.  Yum!  Then I found us a bicycle rickshaw to take us back to the pedestrian street in front of the Suzhou Museum.  After some bartering he agreed to give me the Chinese price instead of foreigner price (or so he said), and I happily folded up the stroller and hopped aboard. C and I sang songs about cats while riding the streets of old Suzhou.  We found the dumplings and then a taxi back to the hotel for more swim time.

The following morning we took the train back to Shanghai.  It was bittersweet — for me at least.  Our tour here is coming to an end.