Safaris.  African animals large and small.  It’s one of the reasons I bid to come to Malawi.  My daughter is at an age where she loves to run and explore outside and she loves animals (When I ask her what is her favorite animal she replies “all of them.”)  Shanghai was good for us in many ways, but playing outdoors was not one of them.  However, given my daughter’s age, there are actually not that many safari experiences she can participate in.  But there were opportunities in Malawi.

Soon after arrival I learned the Embassy’s Community Liaison Officer (CLO) had organized a 2 1/2 day safari to South Luangwa National Park in Zambia for the Columbus Day weekend.  I signed us up immediately.

Departure day arrived.  Two months into our Malawi sojourn.  I wish I could say we were settled, but we are not quite there yet.  The house and yard are still works in progress as is my gradual learning about all things Malawi.  In this frame of mine I really needed a change of scenery, a new perspective, and some quality Mommy and C time.

We met our fellow Embassy safari enthusiasts at a central location bright and early at 7:15 AM on Saturday morning and from there boarded our Kiboko Safaris shuttle van for the trip.  The 90 minute drive to the border went quickly.  The scenery repetitious – two lane road, bicyclists, walkers, goats alongside.  Occasional village scenes.  And then we arrived at Mchinji and disembarked for immigration proceedings.

It was dusty and colorful.  There were lots of large trucks idling and parked in the space between the two immigration buildings.  Lots of people moving seemingly unencumbered between either side.  This was C’s very first land border crossing and at first she seemed annoyed to have to get off the bus for the formalities.  She has been through passport control many times in her young life, but never by land, and never quite like this.  As I already had my visa and C, as an under-16 minor did not require one, we completed immigration rather quickly on both sides.  At the Zambian immigration office I presented our World Health Organization immunization cards to prove we had been vaccinated for Yellow Fever.  Though not really an issue in either Malawi or Zambia immigration officials nonetheless ask and one can be denied entry or fined.  But on this day the official told me her Yellow Fever certificate colleague was not at work and thus it was not required. Of course not.

A beautiful bee-eater in the park

The next three hours too were not eventful, which when you are careening down shoulder-less paved roads where goats and bicyclists and villages come out of nowhere is how you want your trip to be.  The smooth drive was punctuated by stops for random traffic police checks and poorly marked speed bumps, both of which Zambia has in common with Malawi.  The big surprise though was the Zambian border town of Chipata. Just 20 minutes from the border, Zambia’s fifth largest city is about half the size of Lilongwe, but it stood out in developed glory.  Parking lots with clearly defined parking spaces and no pot holes!  Four lane roads!  With curbs and sidewalks and even bike lanes!  My eyes bulged in wonder.  It had already been two months since I had seen such order and it seemed strange and foreign and magnificent. 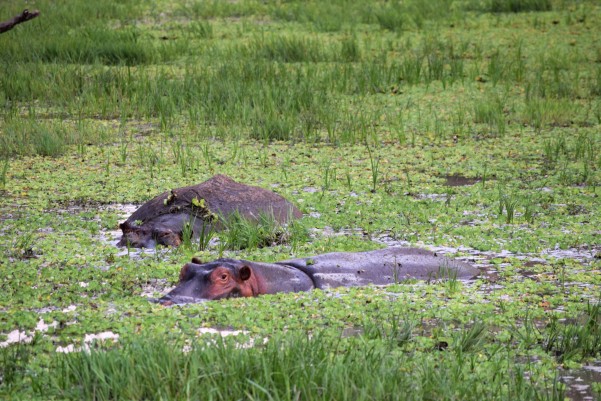 We arrived at our camp just outside South Luangwa National Park around noon.  C picked out tent, one of the closest to the river bank, and we unpacked and relaxed.  We had a few hours before 3:30 tea time and the 4 PM start to our evening safari drive.  C enjoyed the pool and I caught up on some reading.  We also met some of the other guests at the camp, which included antelope, monkeys, baboon, and white frogs.  In the river sSeparating our camp from the park, which at the height of the hot and dry season had shrunk a good 100 meters from the bank, wallowed several hippos and most likely hid more than a few Nile crocodiles.  On the other side of the camp, several bachelor hippos stood submerged in a grass-chocked pond.  At our 3:30 tea break we were informed that upon return from the four hour evening and night drive, we could no longer freely roam the camp.  Flashlight wielding sentries were posted outside our tents to escort us to and from the ablation block and cafe/bar because hippos, elephants, and other wildlife have been known to wonder through the camp at night.

He stops on the hunt to pose for pictures

As we headed out on the first drive both C and I were giddy with excitement.  About seven years ago I had spent five days at Kruger National Park in South Africa, so this was only my second safari experience.  I had been looking forward to doing this with C for quite some time.  Within minutes we saw the hippos and elephants and antelope and baboons and cranes.  We passed over the bridge to the park and spotted more hippo in the river, then a warthog and giraffe.  All within ten minutes of starting.  Thirty minutes in and our driver’s radio sparked to life.  A leopard had been spotted!  We picked up speed and bumped over the dirt roads and across a grassy plain to a ravine where he lay out of sight of several zebras, antelope, and waterbuck.  He picked his way through the ravine, alternating between stealthy runs, picture perfect poses, and languidly laying about.  Though we had hoped to watch a kill, or at least a chase, he could clearly wait us all out. 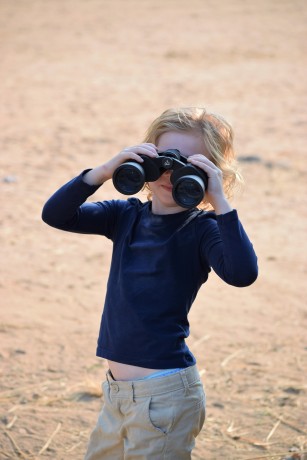 Safari C.  I could barely hide my pride at how well she handled herself

We went on to see more animals as the sun set over the park, including a herd of Cape buffalo.  In the night our “spotter” stood in front of the jeep scanning the darkness for animals with a spotlight.  Though we did see a few animals C and I were tired and would have liked to return to the camp early.  But the night sky stood clear and bright.  Overhead we could make out the Milky Way, Orion and other constellations, and the International Space Station as it made its way across the night sky.  The radio again crackled, news of a lion far across the park.  C, on my lap, and I, sitting in the back of the jeep, held on to the seat bar and closed our eyes, turning the zig-zagging, bumping, drive into a kid-friendly roller coaster ride.  At last we arrived, the lion far from the jeeps, barely visible in the spotlight even with binoculars.  A bit anti-climactic.  All the jeeps turned quickly and sped toward the park entrance — we crossed the gate threshold at 7:58, just two minutes before the park closed for the night.

The following day began bright an early with a 5 AM wake-up call.  5:30 AM we had breakfast and by 6 AM we headed out on our early morning safari drive.  Immediately after crossing the bridge to the park we were greeted by monkeys and lioness!  We spotted a tree squirrel, a family of warthogs, giraffes, zebras and more.  At a watering hole in the shade of a giant baobab tree we saw massive stork, cranes, guinea fowl, an African Fishing Eagle, hippos, crocodiles, and impala.  As a group, our jeep decided to return to the baobab tree for sunset that evening. 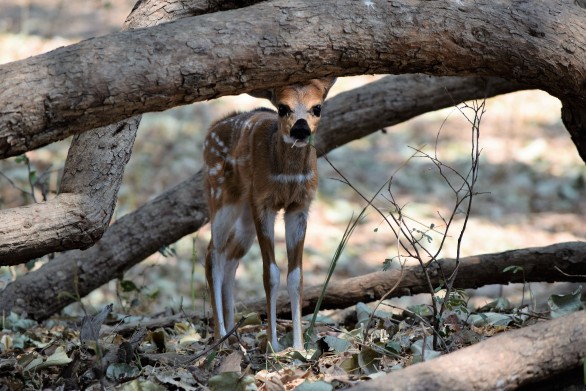 While C hung out with other kids, I made a friend of my own

Back at camp at 10 am we again communed with other guests of both the two and four footed kind.  C joined with other kids (the next youngest was 11 years old but she wanted to spend some time with them rather than her mom) to play a card game.  We had lunch.  C swam in the pool.  We both took a lovely mid-afternoon nap in the heat of our tent, cooled only with the slow rotating movement of an electric desk fan. 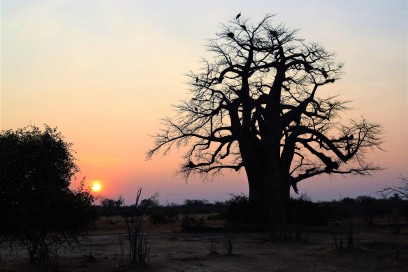 Sunset at the baobab – storks and their nests in the branches

Tea time and then out again for another sunset and night drive, our third and final safari.  We headed across the park towards the massive baobab tree.  Across a grassy plain we watched impala and giraffe meander together.  A warthog running nearby.  Alongside the river, high on an escarpment, hundreds of brightly colored bee eaters soared and darted from their nests in the bank.  In the water dozens of hippos bellowed and a Nile crocodile cut smoothly through the water.  An old, very tall giraffe later grazed on high branches above our jeep.  And still later a bull elephant stood firmly across the path, and we waited him out.  But soon behind we found his his young male scion and his mate.  Finally we arrived at the baobab for tea and the languid sinking of the African sun.

After dark the safari was uneventful.  Note to self: in the future, when safaring with a young child, see if there is an option for a 2 1/2 hour sundowner drive.  The four hour ones were too long for us.  C fell asleep.  I too might have been able to close my eyes, despite the rough and bumpy road.  I cannot recall eating dinner upon return, just an early lights out.

On Monday, the holiday, we were able to sleep in until 6:30 AM.  Breakfast at 7 and we were all off for the return to Lilongwe by 7:30.  Thirty minutes into our journey we stopped off at Tribal Textiles (http://www.tribaltextiles.co.zm/), where hand painted batik-style fabrics are turned into beautiful handicrafts for the home.  After a short tour of their processing facility they took us to their amazing shop.  Bright, bold colors and gorgeous designs popped off beautifully crafted fabrics.  I could not help but by something for our new home.

As we headed back to Malawi, C asked me “How long to the border?”  I stopped myself.  Just two days before when I explained the border crossing, she had no understood a land border.  Now she understands, at least in part, the imaginary line that divides two countries.  She took her own passport and confidently handed it over to the immigration officials.  She stood at one point approximating half her body in Zambia, half in Malawi.  She’s five.  We may not quite be settled here in Malawi, but I was reminded of why I wanted to come here, to expand both mine and my daughter’s horizons.  And to safari.