My second day in Mandalay started off a little wobbly with an unfortunate deal with some other travelers.  Backpackers can be collegial or cutthroat and unfortunately this couple I met fell somewhat in the latter camp.  They approached me in the guesthouse lobby with an opportunity to join them for a day of sightseeing of Ancient Cities and gave me a few minutes to decide.  I made a snap decision to do so.  Despite how things turned out with them, I did end up meeting another traveler as a result, who I remain in contact with to this day. 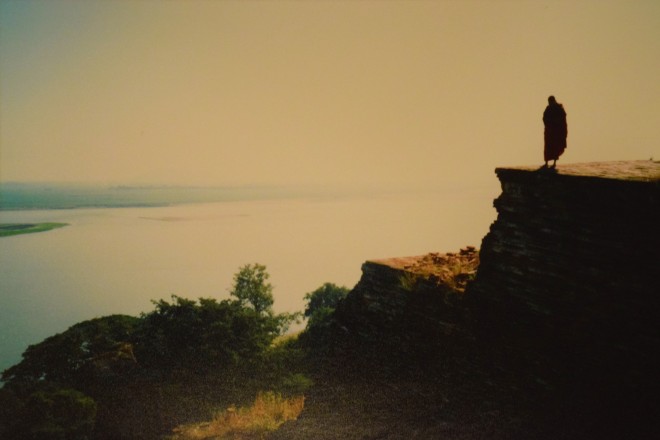 Monk looks across the Irrawaddy from Mingun

I agreed to accompany an Austrian couple to the four ancient cities around Mandalay.  At first I thought I misunderstood, four in one day, but that was their intention.   They had already hired a car and driver for the day for $10 and clearly wanted to defray the costs.  Once our car arrived at a boat landing point ten minutes away though, I saw the flaw in their plan.  To visit Mingun, the first city, one needed to take a boat and arrive at the boat landing 30 minutes before the 9 AM departure.  Thus they had hired a driver to drive them 10 minutes and then wait for them for about 5 hours. I tried to strike up a conversation with them but they only seemed interested in talking with each other.  They did not speak to me the 30-minute boat ride.   Once at Mingun they took off.

I actually made an effort to find that Austrian couple again.  I went back early to the boat landing, lunching at a restaurant with a view of the road.  Then I stopped at a café at the boat landing, again with a view.  That is where I met JJ, we struck up a conversation.  Back to Mandalay on the boat and I waited again for the couple on the other side.  Never saw them.  I gave up.  More than half the day was over and they had planned to visit three more ancient cities; I admit I did not really want to find them.  Later that evening they actually cornered me at the guesthouse and claimed they saw me get into the “wrong” boat and demanded I pay them the extra dollar the driver charged them for me.  I handed it over and was grateful I dodged spending the day with them.

That evening I went to see the Moustache brothers – Par Par Lay, Lu Maw and Lu Zaw.  They are a famous comedy troupe; two of the three brothers (one actually a cousin) were jailed due to a political joke at an Aung San Suu Kyi rally.  One received a sentence of five years, the other two years.  Because of this danger of being jailed, the comedy and dance routines are now done strictly with family members.  I arrived early and could talk with the brothers, get their autographs, and take their pictures.  Par Par Lay, the main comedian, asked an Australian couple for the correct term for being watched by security men and they told him “under surveillance.”  Throughout the whole show he kept saying “…Because the Moustache Brothers are under surveillance” in a false whisper.  Most of the routine was a one-man monologue about the problems in Burma couched in comedic terms and alternated with dance and Burmese traditional costume modeling by his wife and sister.  He noted security forces watched the house and joked his father was outside ready to make the agreed upon signal if those forces closed in.  He talked about the conditions of the roads (“See how nice the roads are after a government official comes to visit.” Or “Notice the road in front of our house is in such bad repair compared to the ones nearby”), about price changes (last year the price of a kilo of rice was 1000 kyat, now it is 3000 kyat), about the vagaries of Burmese currency (he handed out now worthless 75 kyat notes), and so on.

It was a good show and one of the most enlightening and memorable activities of my visit to Burma.  Naturally much of my three weeks was shaped by the tourist lens.   On only a few occasions did I have glimpses of a dark side – at least once, in the early morning hours as a bus slowed through a construction area, I saw small children carrying large rocks, what appeared to be manual child labor.   Seeing the Moustache Brothers – though also aimed at tourists as it would be too dangerous for locals – gave the trip greater context.  Linking my socio-historical background with current events.  Years later when I read of the death of Par Par Lay I was easily transported back to the one night I had an opportunity to meet him.

On the way back from the Moustache Brothers I came upon a performance of traditional Pwe theater.  It was amazing how many people sat and stood around to watch this.  I remember reading about how when the British colonized Burma, they thought the Burmese people were lazy because they spent much of their extra money on merit earning (building small shrines, donations to temples and the like) and spent time watching these Pwe performances.  I am glad the Burmese are such resilient people to have withstood years of colonial rule and the current government.

I had planned to travel from Mandalay to Bagan on the Irrawaddy River boat – true Road to Mandalay (in reverse) but because of the holidays the boat was full.  Instead I would take the night bus, saving on accommodation and a day’s travel.  Thus, I had another day in Mandalay.  My trishaw driver invited me over to his house for a midday meal.  His mother and sister were very gracious, and many of the neighborhood children came over the stare and laugh with (at?) the strange foreigner.  After lunch, my trishaw driver I went in search of a bus to take me to Ava and Amarapura, two of ancient cities.  The bus turned out to be a wild goose chase, either it did not exist or I was not meant to find it.  So, I rented the taxi of a friend of the trishaw driver, and together we set off to see these towns.

I did not care so much for Ava.  The ruins were not as impressive as the ones at Inle and seeing them involved a fair amount of extra work.  I had to pay for a ferry boat to take us across the river, and then rent a horse and cart to take us around.  The cart ride was nice enough and I would have preferred to have just stayed in the cart then to get out at each stop.  The aggressive souvenir selling, with children running full speed behind the horse carts, was tiring and ultimately depressing.  But at Amarapura things were better again.  There was a monastery, but also a beautiful teak bridge – the longest and oldest such bridge in the world.  I regret I did not have more time there; the Moustache Brothers and Amarapura were the best parts about Mandalay.

Sunset from the Amarapura teak bridge

I returned to Mandalay to pick up my backpack and catch the 9 pm cargo bus to Bagan.  Once again, the departure time came and went, and still they were loading cargo.  The space under every seat and the entire aisle was filled with cargo.  This worked in my favor because I could place my head on the tarp covered rice bags and sleep.  A group of Korean students sitting in the back of the bus did not fare so well—next to them a broken window blew in cold air all night and the sacks loaded in the back were full of garlic. I slept fairly well though the ride was not without incident.  I woke up when our tire blew out, then again when we stopped for the bus personnel to look at the tire, and again when we stopped at an open-all-night roadside mechanic.  We were to arrive at Bagan at 5 am.  By 7:30 we were still cruising along the road without any indication of how much further we had to go.  We then began to pick up more passengers.  Anyone who flagged down the bus was welcome.  When we started in Mandalay there were about 25 passengers, lots of empty seats.  By the time we pulled into Bagan at 9, four hours late, every seat and every space available on top of the cargo-lined aisle was filled.  I was glad to arrive in Bagan and settle in to the Lucky Seven Guesthouse for a nap.