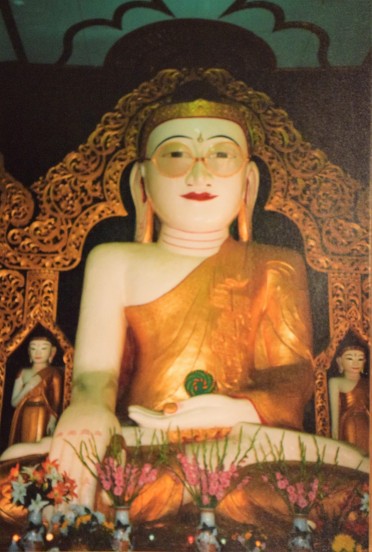 JJ and I took the bus to Pyay to break up our journey to Rangoon.   The bus was scheduled to arrive at 1 AM, but schedules in Burma mean nothing.  We arrived at 2:30 AM instead.  We were the only people to get out of the bus, i.e. the only people insane enough to arrive somewhere in Burma r at 2:30 AM.  We were immediately set on like a pack of wolves by a group of late night trishaw drivers who wanted to compete for our business.

Although the trishaw drivers were plenty, the available rooms in town were not.  We were taken to guesthouse after guesthouse, but each one was full.  Though initially fun to speed around a never-before-visited Burmese town in a trishaw in the middle of the night, after an hour I began to lose some of my joie de vivre.  Two proprietresses sitting out front sadly informed us they too were full.  Then the two women talked amongst themselves and offered me a cot in in the lobby.  I took the cot and JJ headed back to the first guesthouse where there had been only one bed.  Around 7:30 AM one of the women woke me up and told me I could move to a room.  I groggily gathered my things, moved to the room, and fell back to sleep.  Unfortunately, not for long.  A local Buddhist group was doing a donation drive; their loudspeaker droned directly across the roundabout and from that time onwards I heard only the sounds of garbled pleas for money interspersed with scratchy Buddhist music.  It was awful.  I nearly lost my mind!  At 9 AM I got up with very little sleep to my credit.

At breakfast I met two other female travelers planning a share taxi tour of Pyay.  JJ arrived from his guesthouse and we all made plans to sightsee together.  We first went to see the Buddha with spectacles, reportedly the only of its kind.  At the site a guide told us this story:  Once upon a time there was a ruler of ancient Burma who had the gift of second sight.  He could tell the future and help people by doing this.  One day he lost his gift and did not know what to do.  Some monks meditated on his problem and told him the solution would be to donate a pair of spectacles to the local Buddha statue.  Thus, a huge pair of eyeglasses were fashioned for the Buddha. Once placed before the Buddha’s eyes, the king’s gift returned.  After some time, his wife had difficulty with her vision so an extra pair of spectacles were made and placed in the Buddha’s hand. Afterwards the queen’s eyesight too was restored.

We visited two more stupas, some of the oldest in Burma, but my lack of sleep adversely affected my interest.  Perhaps I was a wee bit “stupa-d” out.  There are only so many stupas one can see in a short span of time and retain one’s enthusiasm.  Afterwards, then suffering from a pounding headache, I had the taxi drop me near the hotel so I could walk back to the guesthouse while the others continued on to yet another stupa.  Along the way saw numerous sidewalk plaques prescribing how people should behave in certain filial situations.  Here are two that even in my exhausted headache-y stupor I found amusing:

Duties of a Wife to Her Husband

Duties of a Husband to His Wife

I was unable to sleep the rest of the day though as the madman and his megaphone continued.  At 10 PM I headed to the bus station.  Though JJ and I parted ways here in Pyay, our adventures in Mandalay, Bagan, and Pyay were only the beginning of a friendship.  My next destination would be Bago, but without a direct bus from Pyay I had to change buses in Rangoon.  Surprisingly, the bus not only left Pyay on time, but also arrived in Rangoon early.  Unfortunately, it was 3:30 in the morning.  The taxi drivers all tried to convince me that there were no buses to Bago I was surprised the bus left just about on time, and even more amazing is that it arrived EARLY in Yangon, at 3:30 am!  It was a challenge arriving at an unknown bus station in the middle of the night.  There were others around, but few women. The taxi drivers told me there were no buses to Bago.  I had to pee badly but the toilet was locked tight, so I had to sneak off to relieve myself in a dark alley.  And a ticket seller ripped me off for the price, pocketing the extra 200 kyat right in front of me as he and his friends laughed.  It was a long 2 ½ hours waiting for the bus.

I slept hugging my backpack, but still arrived tired in Bago.  After a nap, I hired Mani, a nice Indian trishaw driver with a cheerful disposition and good English.  He was very good because he kept me from paying the overpriced foreign tourist fee to the sights.  He took me to back entrances, told me the tricks, and I had a good time.  I visited two pagodas and a sleeping Buddha statue, and a cigar factory.  I liked the cigar factory best.  In a house along the main road is a family owned and operated cigar factory.  This was not the traditional Burmese cheroot cigar wrapped in green leaves, but an honest to goodness cigar.  The women were doing all the work.  In the front room men sat playing Playstation, talking, laughing, and smoking, while in the back room the women sat amongst the dried leaves and rolled the cigars, eight hours a day, seven days a week.  I chatted with them with Mani as my translator; they were very friendly and cheerful, despite the work. 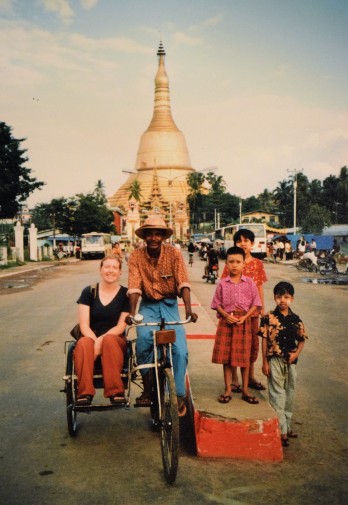 My plan had to continue on the next day but I was feeling worse.  Mani helped me get some medicine and given I had only a few weeks before recovered from the mumps, I made the decision to take a rest day.  From Bago I took the four-hour bus ride to Kyaiktiyo.  Kyaiktiyo is one of the three most holy Buddhist sites in Burma along with Shwedagon and Mahamuni in Mandalay.  The Kyaiktiyo stupa is small, only 24 feet high, but perched on top of a rock covered in gold leaf, balanced precariously on the edge of a cliff on a high hill.  It had only recently been opened to foreign tourists.

I met Chris, a Belgian-Filipino, at a restaurant in Kyaiktiyo town.  We had met two days before in Bago; he had snapped the picture of Mani and I.  We had lunch together and then made plans to head to the Golden Rock.  We waited a full 30 minutes for the truck to the stupa to fill.  The truck resembled a dump truck with benches in the back, but by the time it took off it was jammed full with some 50 people.  The drive was like a roller coaster.  The driver seemed to love fast driving.  We would fly over a small hill and then swoop down, and all of us in the back would be temporarily.  It was certainly a thrilling 30 minute ride.  By the time we reached the parking lot it was after 4 PM.  There was a 40-minute climb ahead of us.  We would have to haul ass up the hill, see the Golden Rock, snap a few pictures, then hightail it back down to meet the last truck back to town at 6 PM.

I had been feeling unwell since Bagan and the climb was steep.  My legs were okay, but I was sweating like a stuck pig, my mouth gaping open and closed like a fish out of water, and my heart was pounding.  Four palanquin carriers spotted me — I must have looked like their favorite victim.  They hurried over with their stretcher-like chair and began walking alongside me.  As I huffed and puffed my way up the road, one of them whispered to me “Ah, so hard, so very, very far.  $4” and pointed to the palanquin.  I managed to decline between gulps of air.  They walked in step with me.  After another twist in the road, they started again.  “Oh, long, long, long way.  Very hard.  You are very tired, $3.”  I was sure I was moments from collapse, but I was not going to give in.  No, I said and continued to trudge up the hill in slow motion.  After a few more turns they tried once more.  “Oh, you so tired.  So hard, so long way.  Much higher, much further, $2.”  I could not take it anymore, agreed, and threw myself on the palanquin.  As they lifted it up they proclaimed “Oh so heavy!”  I shot them a dirty look.    They carried me up a short way and complained that they needed to rest.  They stopped a few minutes later and asked me to buy them drinks.  I refused. They carried me 5-10 minutes more and told me it was the end of the line.  What?! I was just minutes from redemption, from making it on my own, and now I had to pay these clowns?  Then they tried to ask for $2 EACH.  I handed over 500 kyat (50 cents) to each carrier and walked away.

Fifteen minutes later we were at the rock and had a glorious view of green covered hills and the river beyond.  There is much more up there than just the golden rock–many smaller shrines, statues of Buddha, figures of Nats, and the like.  I wanted to touch the rock but unfortunately it turned out women are not allowed, and guards were posted at the staircase to the rock to keep women out.  This did not sit well with me.

As close as I could get to touching the Golden Rock

Once again transport became an issue – I find it somewhat incredible as I near the end of retelling my story from all these years ago how much the transport – the buses, boats (missed and taken), trishaws, palanquin, etcetera – are more central to this trip than the temples and historic buildings and other sites.  It really is more about the journey than the destination.  The return from the Golden Rock to Kyaiktiyo town involved trickery and a standoff.  We chanced staying at the top for sunset knowing the final truck back left at 6 PM.  In full sight of the waiting truck we grabbed a snack but it left without us and we then had to negotiate a return with whatever transport remained.  There was some hard bargaining and threats (to us, not to them) but we finally agreed on four FECs.  But it was not over as the drivers – because of course it was a group and not an individual – tried to get the money several times on the way back but we held our ground until they returned us to our guesthouses.  Exhausted I said farewell to Chris and went to sleep.  The next day a six-hour bus ride returned me to Rangoon, where I spent one more night at the Mahabadoola Guesthouse before returning to Singapore.

My seven-week journey to Northern Thailand, Laos, and Burma was at an end.  I had survived the mumps and a stomach bug, a two-day slow boat down the Mekong, and many, many long bus rides of varying quality.  Yes, it was very trying at times and difficult to be out of touch for so many weeks (at the time Burma had no Internet), but I saw some extraordinary places and met some interesting people.  All in all, it was an amazing adventure.  Looking back now, fifteen years later, I do wonder at the woman who took off on this journey.  After contracting the mumps, she did not throw in the towel but kept on traveling and she did the trip on her own.  She really had some chutzpah.