In the summer of 2003, after completing my MA degree in Singapore and before returning to the second year of my other Master’s program in Monterey, CA, I took off on a seven-week adventure through Turkey and Denmark, with a side excursion to Borneo, because if you are visiting places that are nowhere near each other, why not just throw in another completely random destination? I had initially planned to travel for at least a month in China, but the SARS epidemic and the Singapore government response (required deposit to pay for 10-day quarantine after return from travel to a SARS-affected country), forced me to find another country or countries to visit. 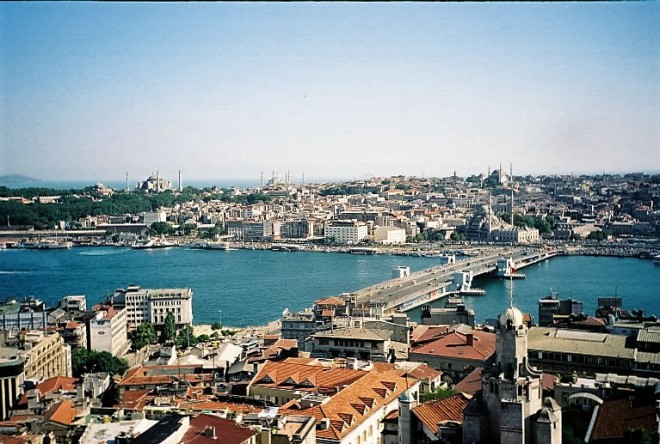 Immediately after arriving in Istanbul I was in for a surprise.  A visa on arrival for Americans cost $100.  I did not have that kind of US cash on me, so I had to take out money from an ATM.  The woman at the visa counter told me the charge in Turkish Lira would be 160 million.    In my rather jet-lagged blur state I was like, uh, what?  Did you say 160 million? At the ATM I counted the zeros multiple times as I did not want to take out $1000.  All around me other nationalities are paying $20 and the like.  The upside is I am an instant millionaire.

After this initial shock I have found Istanbul to be really wonderful.  I visited Topkapi Palace, the home of the Ottoman Sultans and family.  The Harem was perhaps the most interesting.  The location is spectacular, at the edge of the Golden Horn, part of the European side of Istanbul but also on the Bosphorus.  Simply breathtaking.  I also went to see Hagia Sofia; to say it is an architectural wonder does not do it justice.  The Blue Mosque was also on my list.  It stands just across a park from Hagia Sofia, the two buildings facing off against each other, both beautiful.  The Blue Mosque is perhaps most beautiful at night.  I also went across the Golden Horn to the other part of European Istanbul and visited the newer palace of the Sultans, where Kemal Ataturk died in 1937.  Also, a visit to the Galata Tower.  On my second day I did take a one-and-a-half-hour boat trip down the Bosphorus and stayed awake for most of it.  I was having such jet lag and it hit worst at 3 in the afternoon when the trip started. Then the lovely sunshine and I was fighting to keep my eyes open.  But I saw enough to be impressed.  Maybe someday I will move to Istanbul… 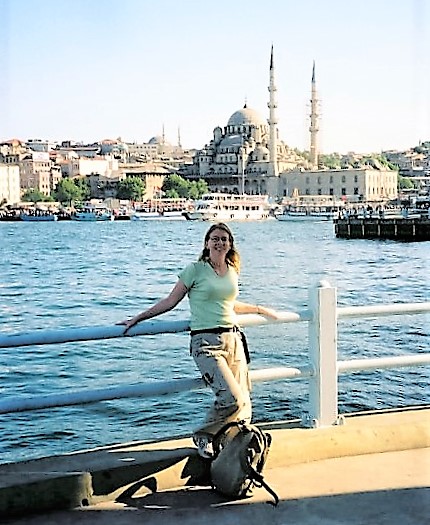 I meant to visit the Grand Bazaar and a hamman (Turkish bath) but I never got to either because each day I had to pass the Carpet Man Gauntlet. Seriously.  I have not met any Turkish women but I have made lots of Turkish male “friends.”

As I stepped out of the Basilica cistern I was approached by a man asking me to visit his travel agency, where I was served apple tea, flattered, and cajoled into looking at tour options.  After I made it out of the travel agency with promises to be back that night to pick up a sample itinerary, I made it only a few steps before being invited into a carpet shop. My first of many. So many.  Here they served me apple tea and then Turkish tea. After more half-hearted carpet sales, flattery, and inappropriate questions I headed out to the palace  As soon as I left the palace and on my way to the Blue Mosque though I was again waylaid. Tea in another shop. An offer for dinner. I hid in a nice place for dinner, but no sooner had left when a guy walking his dog stopped me.  He told me to come with him for some tea.  I said no. He said he just needed a friend and he would be heartbroken if I left on my own. Well, I left.  A second or two later another guy stops me by telling me I dropped some money.  Just kidding he says, but where are you from?  As I hurry away he is calling out something about having tea together…But of course my single status cannot remain for long and I am stopped by Murat (who also sells carpets) and he asks me to, you guessed it, tea, but I tell him I am going to the sound and light show.  Of course, he says he will join me.  I do not argue.  It seems futile.

The second day was about the same.  I have drunk more tea, seen more carpet shops, and been invited more places than ever before.  At one carpet shop two guys bought me a kebab lunch and a taxi driver gave me a free ride.  He kept driving alongside me as I walked up a hill toward my destination.  I said again and again I would walk.  He asked again and again to drive me.  Eventually I relent and sure enough he drove me to my destination.  I declined to join him for tea.

I would be remiss not to tell the story that I have regaled many of my friends.  The strangest of the carpet store adventures.  Perhaps one of the strangest of my travel tales. It started out normal enough, being asked in to “just look” at some carpets and to sit and have some tea.  I made myself clear – I had no interest in buying a carpet, could not afford one and did not have a home to put one in.  I had a cup of tea and made small talk.  I was invited to the second floor of the carpet shop, where there were even more carpets laid out in piles and on the walls, but there was also a sunlit corner sitting area.  There we sat for yet more tea.  And then, and I have no recollection exactly how this bizarre event came about, I found myself sitting with the store owner massaging a lotion on my face!  It makes me laugh every time I think about it.  I think he said he had some wonderful Turkish moisturizer and would I like to try it?  It smelled like lemon pledge.  I sat for a few seconds, my eyes closed, the sun streaming in, the slow rhythmic circles on my face…when my eyes flew open and I thought, what in the world?!… I stood and hurried down the stairs and out onto the street.

I feel a little strange writing all of this now.  Two things come to mind – one is a tweet the State Department sent out about safety overseas.  It read: “Not a 10 in the U.S? Then not a 10 overseas.” They caught a lot of flack over it and quickly deleted it.  But it really is so true and something that people traveling overseas should really think about.  When I was traveling in Turkey I was still relatively young, in shape, attractive.  Yet the attention I received was really abnormal.  I was suspicious from the first but entertained some of it because it IS flattering, and also it became very obvious that the only way to avoid a barrage of unwanted attention was to accept the company of one person for a period of time.  The lesser of two evils.  The second thing that comes to mind is while this was perhaps an odd reversal of what may happen to men when traveling and hanging out in particular venues, it was also an extension of how many men feel they are perfectly free to insert themselves into women’s space.  I could not be left alone.  And I accepted at first out of politeness – a courtesy I certainly did not need to extend to any of these strange men – and then out of sheer exhaustion.  I genuinely loved the city of Istanbul.  The history, architecture, culture.  And yet these interactions took up my time and while I took them in stride and found both the humor and the story in it, I wonder how different my trip would have been had I been able to just sightsee without these interruptions?