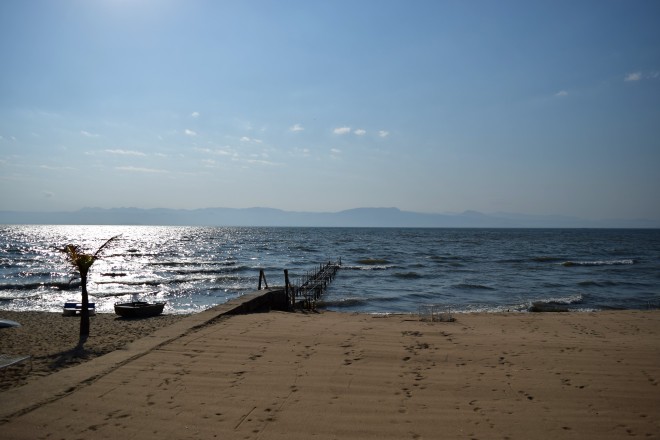 It was a long summer.

I mean, weeks and weeks and weeks of covering for other positions empty during a transition gap, different duties due to a dearth in staff, and the unexpected because it was summer and we were short staffed and by Murphy’s Law this meant an uptick in political, economic, and consular activities.  It is one thing to anticipate it, but another to live it.  Do not get me wrong–I am not lamenting the work, much was quite interesting–but I was envious scrolling through the photos from weeks-long Home Leave or vacations of friends.  I might have had a wee bit of uncharitable, or rather undiplomatic, thoughts when a colleague told me in mid-August how he was so ready for a vacation, six weeks after returning from a month off in June.   It took a great deal of my diplomatic training to just smile and say “I hear you!” and not trip or shove him.  Diplomacy is such an amazing art.

It will still be six more busy weeks before C and I take off on a much deserved out-of-Malawi mommy-daughter holiday, but I decided that at least for the Labor Day weekend we would get out of Lilongwe, tackling some place on my Malawi bucket list.

Lake Malawi is the third largest lake in Africa and is sometimes called the “Calendar Lake” as it is approximately 365 miles long and 52 miles wide.  On the western shore of Lake Malawi, about ten miles north from where the lake ends, narrowing drastically as it flows into the Shire River (pronounced Sheer-ray), lies the small lakeside town of Nkopola.  This was our destination for the weekend. 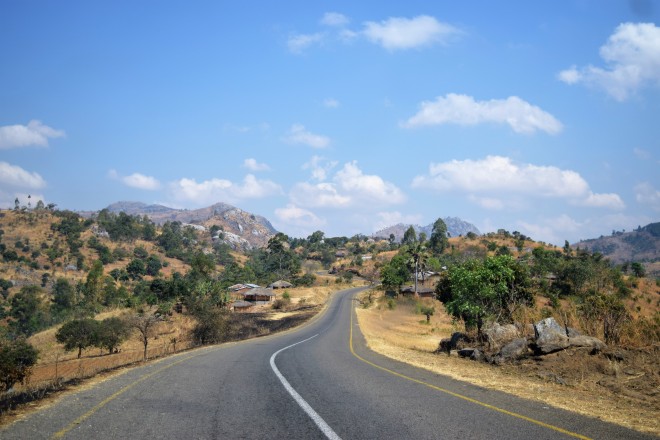 The road through the high hills

Malawi is surprisingly hilly (surprising to folks like myself who prior to arriving had little knowledge of African geography).  The country sits at the southern end of the East African Rift; the north and central western portions of the country an undulating series of hills rising and falling between 2,000 and 5,000 feet above sea-level.  I decided instead of heading east and then south, we would first head south on the M1 and then just past Dedza, which skirts the Mozambican border, turn to bisect a high hill range towards the banks of the lower lake.

I had heard the road would bend and curve, yet I was still unprepared for the serpentine twists that with each turn would reveal yet another stunning view of the stark, yet beautiful, countryside.  Little traffic (there was more foot traffic than vehicles) meant I could stop on the road now and again for a few moments to snap a photo or simply gaze in happy astonishment at the vista before me.  C too gasped occasionally from the back seat.  This road took only about 40 minutes of the three and a half hour drive, but it stands out in my mind.

Rooms built against the rock face

We arrived at the hotel just at lunch time and happily checked in, finding we had been assigned one of the unique rooms built into the face of rocky outcrop fronting the beach.  The rooms themselves were nothing to right home about.  There was a decent queen sized bed, a nondescript desk, and a too large chair that would not push under the desk enough to allow easy passage between the bed and desk.  Outside our window a large cactus obscured almost all view of the beach.  But you could hear the waves, see the bright sunlight glinting off the cacti thorns and a brilliant blue sky between cactus spines, and C breathed in deep and declared the air to be fresh and clean.

The room may not have been all that, but the lush hotel landscaping, particularly on the side of the grounds where are room was located (the other side were ground level rooms and rondavals with much less greenery) certainly made up for it.  Hungry we headed to lunch.  The tasteless interpretations brought to us left so much to be desired, but it being hot and beachy, we had little appetite anyway.  C just wanted to get her swimsuit on and enjoy the water.  Pool, lake, whatever.  We headed to the pool where C quickly made friends (it helps to bring diving fish toys and a giant inflatable sea turtle on which at least four kids can ride), and I enjoyed a book.  I felt inexplicably angry about the lunch service, but I could feel the tension beginning to melt away. 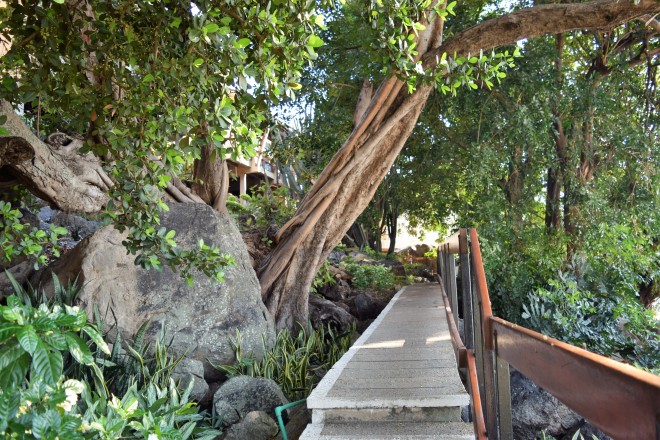 The pathway to our room

We had a quiet evening.  By that I mean we did little but hang out in our room watching a Marvel movie on the television and dining on the half decent version of room service pizza.  However, a large conference of Malawian auditors rocked on late into the evening, the thumbing music from their venue reaching even to our location at nearly the furthest room away.  Still we slept well.

After breakfast on Sunday we drove the twenty or so minutes to the township of Mangochi.  Once called Fort Johnston during colonial days, it was originally established in the 1890s as a defense post on the Shire as it flows from Lake Malawi and as a deterrent to the Yao slave traders.  Today there are few traces of this colonial past.  We stopped to look at the Queen Victoria Memorial Clock Tower built in 1901, its dilapidated clock face almost entirely missing, and a cannon from the Gwendolen, the Mangochi-built British gunboat and the largest ship to patrol Lake Malawi. It took almost as long for me to write that sentence as it took to circle the clock tower and read its historical markers. 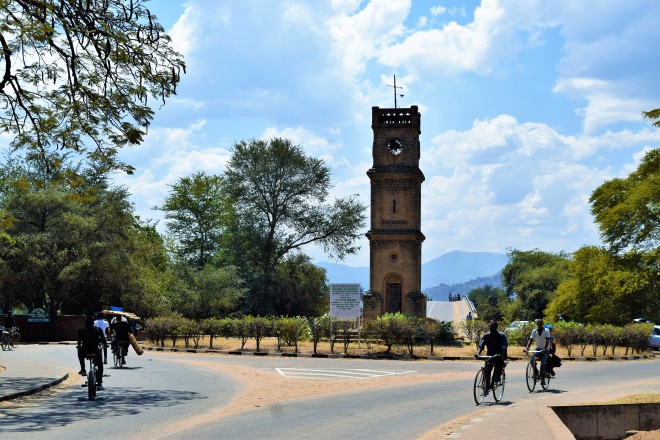 Despite its condition, the fact it remains standing and its placement at the edge of town and ahead of a bridge over the Shire, make it worth at least a cursory visit

C and I then headed over to the Lake Malawi Museum.  I only know of three museums in all of Malawi and I have been to “museums” in developing countries before, so I had set the bar appropriately low despite the surprisingly high marks on Google Reviews (six reviews giving it an average of 3.8 stars out of 5).  As we approached the single story ranch style building, which resembled a cross between a warehouse and a home, a sad metal playground consisting of a slide and the cross bars of a swingset without the swings in the yard to the right, it was not immediately clear it was open or operational.  The wide concrete slab in the yard likely a parking lot for cars that never come.  But two individuals, a thin older man and woman, sat on the porch next to the open door, giving more the impression of squatters than museum curators.  As I read the entrance fee of 500 Malawian Kwacha (USD 70 cents) and tried to hand over the money to cover both C and I, the man informed me in garbled English that the museum, though technically open, had no electricity.  I said that was fine, we would still go inside, figuring some windows would still provide some light.  But there were no windows and the darkness inside was near complete.  Not wanting to miss out on one of the major attractions of Mangochi, I asked the man if he had a light.  He pulled out a small torch and I lit up the flashlight on my phone and together we made our way through the tiny museum, past sad dioramas of Malawian wildlife, a replica of the deck of the Gwendolen, and a pathetic aquarium.  Well, if it had had fish it would have been poor, but the four small tanks empty of water and life did not even rate it the name “aquarium.”

As I handed over the money and thanked our torchbearer, and turned to leave, I mentioned to C it had been a waste of time.  She however insisted we go back inside one more time!  She said she had not seen enough of the boat deck, though I noted given how dark it was, it was hard to see anything at all.  She was adamant so we had a second visit.  C gave the museum 5 stars; I give it 1/2 a star, due in a large part for the amusing adventure of going through it in the dark. 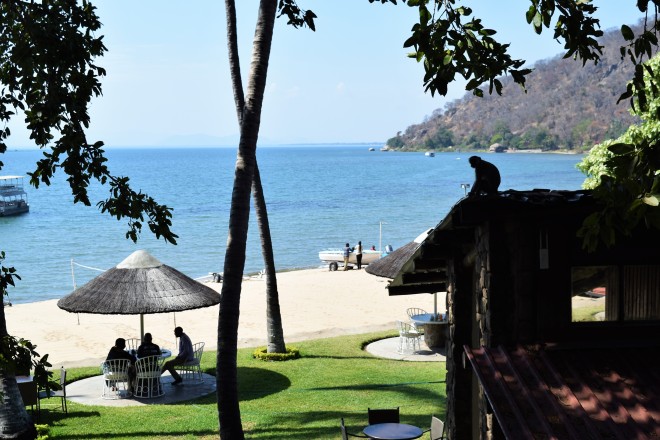 Not relishing another poor lunch at the Sunbird, we had lunch at another nearby resort and then stopped at a wide expanse of dirt where dozens of goats were lazing about.  C dubbed it “Goatland” and boasted that she would easily catch a baby goat and implied we would then toss said goat into our car in and add to our growing menagerie.  Though I made it clear we would not be making off with some villager’s goat, I am glad C is not as good at goat catching as she proclaimed.  We then spent several hours on the beach – C playing in the surf and in the sand, with myself again reading a book.

The following morning I felt completely refreshed.  I took some time to just breath in the lake air and listen to the soothing sounds of the lake waves and the twitters of morning birds.  The restorative powers of a beach, nature, rhythmic swells, felt almost overwhelmingly strong.  Once again I felt surprised how even a few days of a change of scenery could do so much for my spirit.  C and I snuggled for a bit; how I love sharing these moments and places with her.  Then we packed up for the trip home.  Even the drive made me happy.