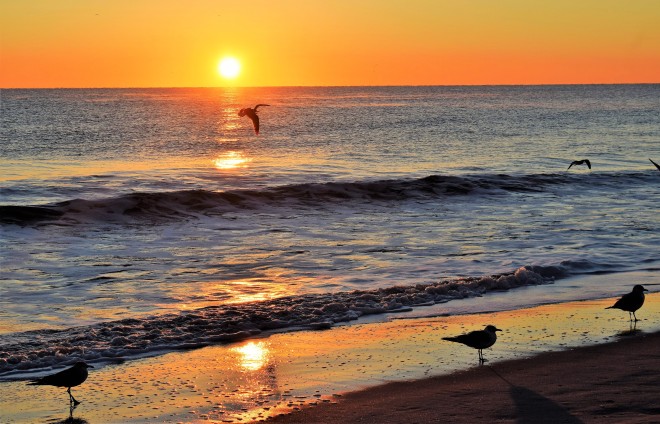 Finally, our first rest and relaxation (R&R) vacation was upon us.  It seemed very long in coming after a whole lotta planning and a seemingly endless busy season at work.

It had been over a year since we had been to the United States.  Initially I had planned to return in July as I had a three-day capstone course topping off a year-long, mostly distance learning, interactive leadership course.  I had hoped to take another week plus and bring C so she might spend the week I was in training with her dad, and then we would have another week together seeing friends and family, maybe going somewhere new.  But a complicated transfer season at a small post, the timing of my training and proposed leave, and a few other factors resulted in my not returning to Washington last summer.  This denied time away from the U.S. and my uncle’s congestive heart failure diagnosis led me to plan for a winter R&R stateside.

As the R&R shaped up in early August, I became especially determined for it to include all things: some time with family, including C spending time with her father, some time reconnecting with the little bits of Americana we missed, and some mother-daughter fun somewhere new, somewhere often described as “paradise.” 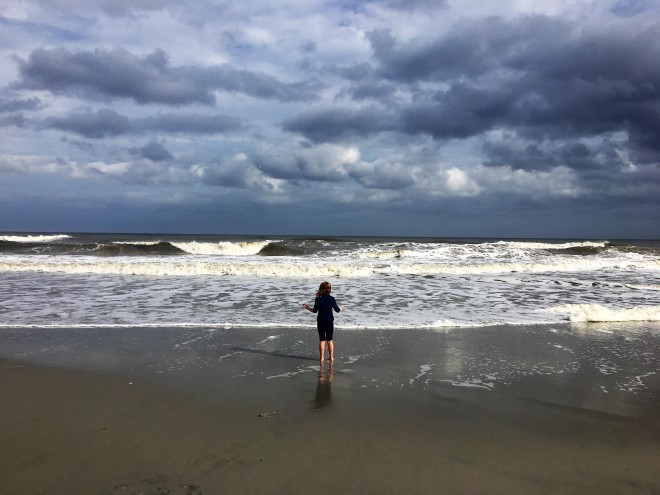 C looks out to sea at Jax Beach

Unfortunately my uncle D declined rapidly and passed away in mid-September.  In this lifestyle we often miss rites of passage from weddings to funerals, to births and graduations.  This reality hit particularly hard this time; he had played a prominent role not only in my life but in my daughter’s.   For this often solo traveler, I realized I had visited my aunt C and uncle D in Virginia, West Virginia, Florida, and Germany; they had visited us in Ciudad Juarez and Mexico (where few people would despite the proximity), and we had traveled together to the Bahamas, France, Luxembourg, and South Dakota.   We would not get a final visit.

After a long trip that involved stops in Addis Ababa, Dublin, and Washington, D.C., we landed in Jacksonville, FL.  My aunt picked us up.  We headed to her condo first to relax and get cleaned up (we had just spent 30 hours traveling) but soon headed to the beach to watch the rise of a very full moon, eat Mexican food, and check out the Jax Beach Deck the Chairs holiday light display.  It was all very special.  Normal if we lived in America perhaps, but special because we do not. 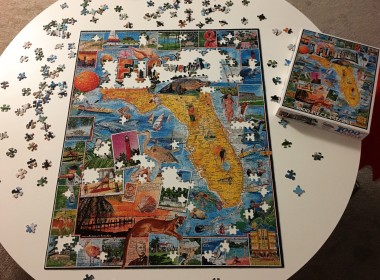 The following morning we woke up early so we could also welcome the sunrise at the same beach.  However, a cold snap had descended on Florida, temperatures were in the 40s.  I had packed a few cold weather clothes for C, but had none for me.  So we bundled up in spare items my aunt had; I put on my Uncle D’s sweat pants and sweat shirt.  As we stood on the beach watching the sun break over the ocean’s horizon, I felt like my Uncle was with us.

Then we took C to the airport to meet her stepmom TG, who was flying in from KY to bring C back to her father’s place for Christmas.  Yes, indeed.  My not-quite-7 year old daughter would be flying for the first time without me.  This is a pretty big deal, right?  Early on when I made this plan with C’s father, I had felt a wee bit nervous, but once the day arrived, I was okay.  And C was super excited to fly with TG and see her dad.

And I got five days with my aunt, just she and I.  We went to the movies.  I am sure I mentioned before that there are no theaters in Malawi.  But we went to see Mary Queen of Scots, i.e. not an animated children’s movie.  We hung out at Target, ate out at Mexican and other restaurants or just had chips and guac at home, and built puzzles.  We laughed at our ridiculous struggles with my aunt’s cable and when the young 20-something at the movie theater charged me the retiree price.  Then C returned from KY and we celebrated my aunt’s birthday with lunch at one of her favorite places.

My aunt drove us to our hotel next to the Jacksonville airport where we would stay one night before heading out early for the next phase of our trip. 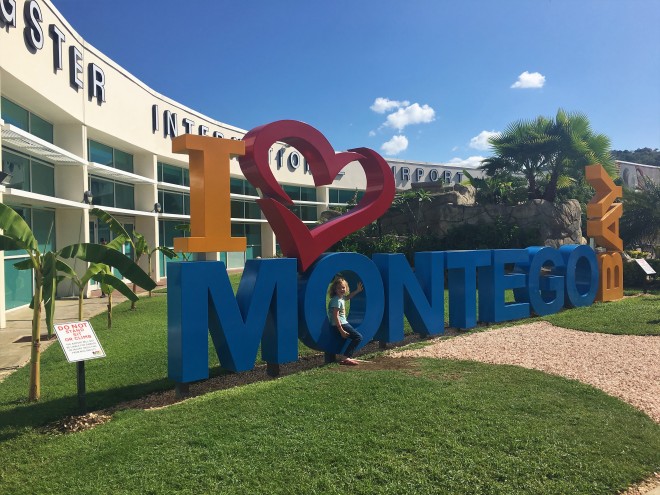 There was no direct way to get from Jacksonville to Montego Bay, so once again we spent much of the day traveling.  Generally I am okay with it because even the journey can be relaxing and fun, and it is a means to an end.  And I booked the flights after all.  But as I was quite eager to get to Jamaica — it is someplace I have wanted to visit for awhile — even with the upgrade to business on our first leg could not make that trip go fast enough.

We landed at 4 and checked into our resort, only 15 minutes from the airport, by sunset.  Our room had a beautiful view out toward the main pool and the ocean beyond.  The warm Caribbean breeze felt wonderful.  The all-inclusive hotel had pre-booked us for one of the reservation only restaurants for the dinner.  We enjoyed our meal and then headed back to the room.  Then the entertainment began, so loud it sounded as if the band was at the foot of our bed.  The front desk told me it would last until 10 pm, but we were so tired we fell asleep anyway. 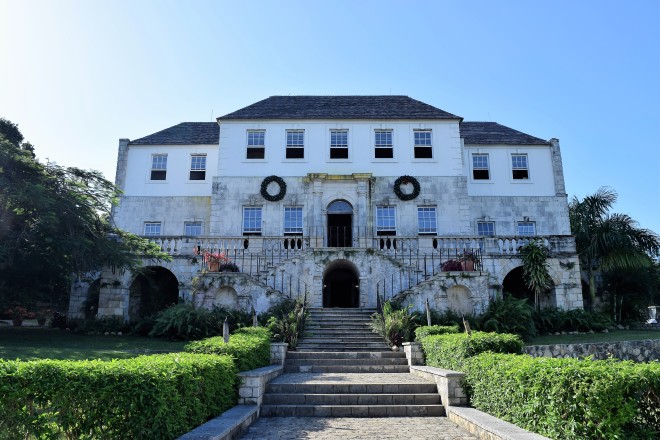 On our first full day I was eager to get started.  We arranged a taxi to Rose Hall, a late 18th century plantation house.  The Georgian style mansion commands a lovely view towards the sea, but also is representative of the sometimes dark history of plantation life in early colonial Jamaica.  It is most famous for being haunted by Annie Palmer, the “White Witch of Rose Hall,” who murdered slaves and husbands indiscriminately.  I love me some historic houses and tours of them — I have taken C on plenty of them (from the historic Adams House in Deadwood, SC to the Mary Todd Lincoln house in Lexington, KY) so she knows the drill and tolerates them.  She seemed rather excited to see a haunted house, especially as it was during the day.

The only scary thing that came out of that trip was the price the taxi driver demanded upon return to the hotel although he had failed to show up at the appointed time.  It turned out the hotel info desk had incorrectly informed me of the fare; taxis really do charge an arm and a leg from tourist hotels.

My mood had soured as a result but a good lunch renewed my spirits and we set off on an afternoon tour on the Martha Brae river.  Floating down the river on a bamboo raft is one of the top attractions for Jamaica.  All started out okay.  We were picked up from the hotel about 1:30.  As luck would have it, we were the first guests to be picked up.  We then drove to two other hotels to pick up a family of nine, then a family of 11, after which we drove the 30 minutes to the rafting village.  And there we stood around for at least another 30 minutes, ostensibly to pick up our “welcome drink” included in the rafting trip, but it seemed designed for alcoholic visitors to booze up.  Finally, someone brought life jackets and led us down to the rafts.  C and I were in the middle of the pack — the family of nine before us, the family of 11 somewhere behind. 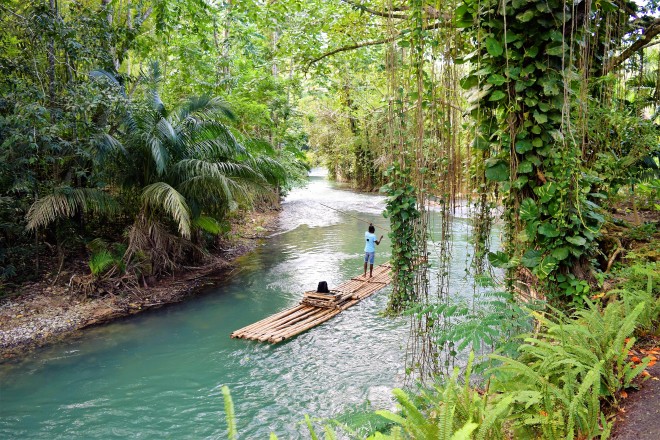 As we floated down the river, I figured we would go at a leisurely pace given our older Rastafarian captain, but soon enough we were passing everyone else.  Our guy might have seemed slightly out of it, but he was slow and steady, while the other guests, mostly liquored up folks making a mess out of poling on their own (but having a blast doing so), and the romantic couples, were especially in no hurry.  We blow past them all.  While C thought this was super awesome, I realized the faster we reached the end, the longer we waited.  And sure enough, we waited about 15 minutes before the nine-person family rolled in.  And then we waited, and waited, and waited.  Only 45 minutes later the rafts of the other family finally arrived.  There had apparently some kind of payment issue, but I was still annoyed we waited an extra HOUR.  I was reminded why group tours can be a huge pain in the a$$.

We arrived back tired, had a quick dinner, and hit the hay, lulled to sleep by the rambunctious stylings of the entertainer of the evening.