More on my three-week trip to three Polynesian islands – I arrive at my final destination, Samoa, and proceed to…get nowhere fast.  Another gentle reminder that in the South Pacific you cannot do anything but slow down, take your time, and smell the flowers.

Quite possibly the best part about American Samoa

I dislike arriving in a new country at night.  There is the confusion associated with trying to find your way around a new place when the landmarks and signs are cloaked in dusk or darkness.  There is also the very real possibility of being ripped off.  In my experience it is far easier to be taken advantage of in a new place in the dark than when I arrive in the day.  The banks, information booths, transport stations and the like are closed or running on far more limited schedules.  I have more confidence I can thwart would-be advantage takers when the sun is shining.  Whether it is truly the case or I have simply psyched myself up to believe this as truth I cannot say.  But on this trip, I could hardly avoid arriving after dark.  I suppose the Polynesian Islands are less frequently visited and therefore airlines can place those routes on the backburner, or rather on the less popular times.  If you want to go to Fiji or Rarotonga or Samoa, you will have to be satisfied with arriving at 2 am or 12:30 am or 9 pm or simply not go at all.

Despite Rarotonga being such a small island with a small airport, the late night (or early morning, depending on your perspective) arrival was very pleasant.  The terminal seemed to suddenly light up, a beacon to the weary travelers.  The light joke regarding the single baggage claim area brightened everyone.  The cheery ukulele music struck up as soon as the first person set foot in the terminal was welcoming.  There was even a small board with traveler information – from resorts to backpacker – available to the late arrivals.  And someone from the hostel was waiting for me in the arrival area to sweep me into a van and off to the hostel with no fuss and no worries.

This was long among my favorite pictures from Samoa

Not so arriving in American Samoa.  At 9 PM in the evening there were plenty of people inhabiting the waiting chairs, and standing in check-in lines, but there was very little else to do.  The vending machines were on, but no banks were open, no changing money facilities – not even an ATM that I could see – no restaurants, no tourist information booth, or even an information kiosk were available to the evening arriver.  This to me only heightens the confusion and immediately sets the traveler ill at ease.   There hadn’t been a shred of food available on the two-and-a-half-hour flight from Rarotonga; I was ravenous.  There was no one to ask about a good hotel or hotel rates.  I simply asked a security guard, and he told me the closest hotel was the Pago Pago Airport Hotel.  As my greatest ambition in American Samoa was to find the quickest way out and on to Western Samoa, I thought closest would be best – even at US$85 a night.  Though that may sound high, it is actually in the low range of accommodation costs in American Samoa.  Welcome to America.

My brief stay in American Samoa seemed as typically American as one can imagine.  I stayed in a relatively expensive hotel, watched CNN and Jay Leno and several other shows I cannot remember, I could not walk anywhere and thus had to be transported to the hotel in a taxi (in fact without a car you are pretty much stuck in American Samoa) and I had McDonald’s for dinner – the only restaurant still open when I found myself getting settled at the hotel at almost 11.  The proprietor of the Pago Pago Airport Hotel was a large, friendly Samoan woman who drove me to McDs, and arranged for my taxi back to the airport the next day (and even paid for it) – but this was about as Samoan as the experience got. 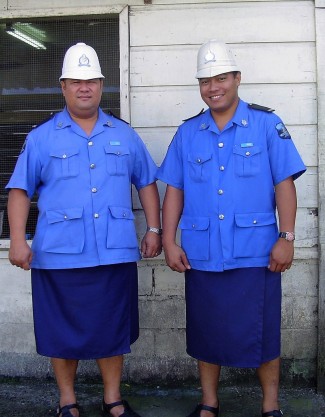 The next day I headed to the airport around 10:30 as the first flight to Apia in Western Samoa left at 11 am.  I had no ticket.  As there were no airport staff around except for one check-in agent, and a few other random people who flanked the agent whose role was unclear, the only way to find out information was to stand in line.  This was the first time I have ever tried to check in to a flight on which I do not have a ticket.  But I gather that although this might be odd for me, it is not too terribly unusual in Samoa.  Quite a number of activities seem very flexible.

At the counter the agent told me to wait, someone would be along to help.  The agent would be right back; there was another foreigner also waiting to do the same.  And so, we waited.  Some friendly Samoans hanging around the counter engaged me in conversation.  A ticket agent arrived, told us to meet him in the Polynesian Air office, then immediately disappeared.  It took myself and the other foreigner some 30 minutes to find the office.  Tickets were sorted out; however, only outbound flights could be guaranteed; we would have to set the return in Apia the following day.  At least I had a ticket to Apia for 1:45 PM.

Back in the line, my new Samoan friends said they would take care of my bags while another woman took me to the local Cost-u-less store for some lunch.  One might think this an odd decision on my part.  My bags were out of sight with perfect strangers while I drove away with another one.  But really all they said they would do happened.  My bags were untouched where I left them and the woman drove me to the store.  Later, as I sat in the airport snack lounge (Cost-u-less was closed) the ticket agent asked for my ticket.  He trotted off and had me checked in and my bag taken care of within five minutes.  Samoan hospitality!

The hospitality did not end, but it turned out I was everyone’s new friend and thus needed to reciprocate.  An airport security officer thrust an open can of Mountain Dew in my hand, telling me to deliver it to my friend.  My “friend” being my new check-in helper and bag watcher I had only set eyes on an hour before.  I found myself wandering around the airport gingerly carrying his open Mountain Dew in search of him.  I must have looked terribly lost because another airport official approached me to ask me if I needed help.  I explained what was surely a bizarre story about searching for the owner of the Mountain Dew, but the man did not blink an eye and joined me in my search.  We found Mr. Mountain Dew at the immigration counter, where I handed over the can.

Now I had Mr. Customs to help me.  Noting that I still need to pick-up an order at the snack bar, he tells me he can take my passport and complete all the immigration paperwork for me while I am in the restaurant.  This seems one step too far on my trust-o-meter so I decline.  He decides instead to join me at the restaurant.  He sits at my table, orders a beer (despite being on duty), pays for my lunch, then takes my passport and completes my immigration departure forms.  HE waits for me as I eat, accompanies me back to immigration, then stamps me through.  There he tells me to wait, he will give me a letter to give to his friend in Apia.  I can hardly believe this is happening.  I look around, I am dying to share this bizarre situation with someone, but this must be completely normal in Samoa.  He returns with a letter I am to give to Gary at Polynesian Airlines in Apia, then gives me his telephone number in case I ever need help again in American Samoa.  Then he walked away, and I headed for the plane.

One would think this could not get stranger, but it does.  As I sit down in my seat, 1A, the pilot suddenly turns around and says “T—-, your friend Brian told me to tell you not to forget the letter for Gary.”  How did I get on a first name basis with the pilot and who the hell is Brian?  Brian told me he was the Prime Minister of Anu’u.  The pilot asks me if Brian explained how I was to know Gary when I saw him.  I said no.  The pilot tells me it won’t be a problem as Gary will most likely be the biggest guy I have ever seen.  And off we go to Apia. 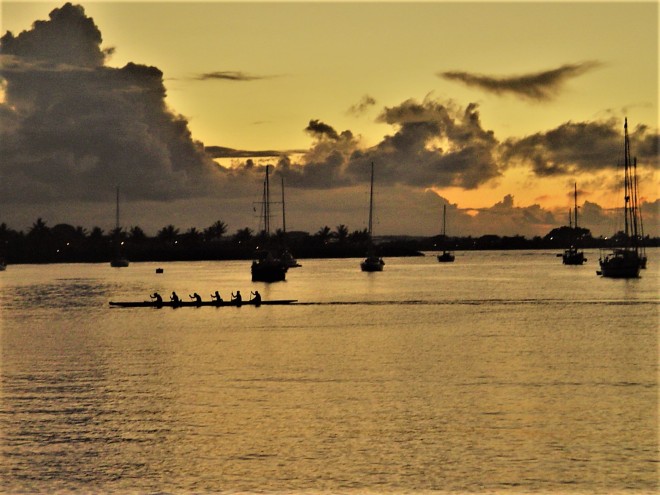 Sunset in Apia Harbor – worth it!

Landing in Apia some 40 minutes later, the pilot reminds me again to give the letter to Gary.  After clearing immigration (which took all of about one minute) I find Gary quite easily.   He is a short but extremely stout man, perhaps as wide around as he is tall.  I say “Gary, I have a message for you,” and hand over the envelope.  Gary shuttles me and the pilot to an office with combination locks on the door.  I am told to sit in the chair by his desk.  I feel I have done something wrong.  He opens the letter, reads it, then barks at me “Who is this woman?”  There is obviously a woman mentioned in the letter.  I say “I don’t know.”  The pilot asks me “Didn’t Brian tell you about this letter?”  I say “No, I just met Brian 20 minutes before the flight.”  They decide the letter has nothing to do with me and I am free to go.  Welcome to Samoa.

Given all the work I put in just to arrive in country and settle in to the guesthouse, it is no wonder I spent the rest of the day doing very little.  I went only on a short self-guided walk around Apia town, the country’s capital and main port.  But I felt very accomplished and happy.