The second half of our Fall Break trip which began in Zimbabwe and ended at Lake Malawi.

This part did not begin as expected.  I debated how to write about it or whether to write about it at all.  But I did not see how I could omit what occurred and still accurately portray our lives here and our, or at least my, state of mind as we headed out from Lilongwe to the upper-central area of Lake Malawi.  As much as we enjoy Malawi, there are, of course, times when life here is not easy; when cultural differences lead to misunderstandings and/or confusing circumstances.  To pretend otherwise gives false impressions.

The summer before I arrived in Malawi I spent approximately three months in Washington, D.C. in training to prepare for my position.  During one of the course sessions, the presenter turned out to have once served in the same job, sort of like my great-great-great-great-great incumbent.  I caught him after his presentation and we had a few minutes to talk.  Like me, he and his family had moved to Malawi from China and appreciated the cleaner air, the large yard, and the smaller population.  But, he warned me, the only part they disliked was dealing with the household staff.  It was not the work ethic, but the potential for bickering and competition between staff members.

Fast forward and C and I are arriving back from Zimbabwe.  Before leaving Malawi, I had arranged with our nanny to pick us up at the airport.  But when we walked out of arrivals there was no one there for us.  And 30 minutes later there was still no one.

I do not completely understand what happened but basically, my nanny attempted to leave the compound to pick us up, but one of the residential guards refused to let her leave.  There may have been threats, yelling, stones thrown, and others called in to resolve their spat.  It turned into a “he said, she said,” explanation, with lots of finger-pointing and claims that God as their witness knew he/she was the one telling the truth.  But the end result for C and I is we were left at the airport for 2 1/2 hours later than expected and a good bit of my positive vacation feels from Zimbabwe had dissipated.

I wish I could say I got over it quickly, but that would not be true.  I debated about canceling the rest of our trip, but I knew that would not improve my mood.  We had reservations on the lake and I hoped a good long drive might do me good.

We woke up early-ish and I finished packing up the car so we could get on the road by 8:30 AM.  The unexpected situation of the day before was still very much on my mind, yet it helped the first, familiar 90-minute drive east on the M14 from Lilongwe to Salima town fly by.  There we took our usual Salima break at the nice gas station, loaded up on snacks, and then cranked up the CD player in the car (yes, the CD player — this is what you are forced to do when you drive a 2006 vehicle with a broken radio). 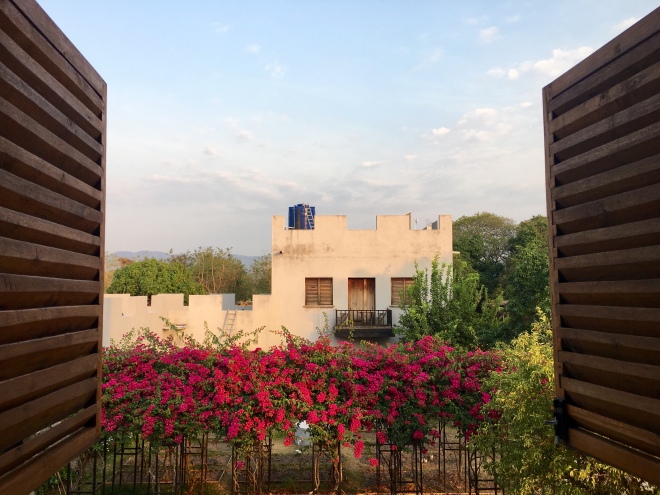 A room with a view – Malawi, yet it does not look like Malawi

All in all, it took five hours to arrive at our destination, Kachere Kastle, the unexpected hotel built in the style of a Moorish castle sitting on an expansive flat sandy beach in a quiet cove on the upper third of the incredible Lake Malawi.  I recall reading it took the owners about eight years to bring their dream to reality.

I had booked the upper tower room for C and I – a top floor room in the front turret.  I wanted the best room — a view toward the beach.  But the room also included a sitting room, a balcony, and a staircase to the roof, where we could have slept out under the stars had we so desired (it was quite windy and unexpectedly chilly, so we did not).  I made sure to book this special room some months in advance and thus was surprised to learn C and I would be the only guests for the night.

Scenes from a beach walk

Almost immediately we changed and parked ourselves by the pool.  I blew up our giant pool tortoise for C, ordered lunch, then relaxed into a reclining chair poolside and took out a book.  I could feel some of the tension of the previous 24 hours sliding away.  And then our lunch arrived — and it was some of the best food I have had in Malawi.

Like Zimbabwe, northern Malawi appeared to be on a limited electricity shared plan.  We were told that the electricity would be off for about eight hours in the morning.  Good thing we had just come from Zim; we took it in stride.  The hours passed.  We ate.  We played in the pool.  I am not particularly good at relaxing.  I generally feel a strong pull to be doing something, anything.  Reading, writing, planning, walking, something.  I find it very hard to slow down, but I needed to.  Therefore a long, slow stroll at sunset was in order.  There were a few boats on the beach; I am not sure if they were there for purposes of actual use or placed there for atmospheric reasons, but we stopped at each one for some photos.

The beach was largely deserted — again, just for us.  We could see a few locals in the distance, and a few children approached us, some giggling, others quiet and curious, but for the most part we were left alone, and I was grateful.  C collected smooth stones she found on the beach, first in her hands, and then when they became too numerous, into the gathered folds of her skirt.  She drew pictures in the sand for me to guess what they were.  I snapped her photo atop a large boulder on the beach; rather similar to the boulders we found strewn across the Zim countryside, but in Malawi are often found along the lake.  A few small, naked children, appeared near the rock.  They yelled at us–I think it was meant to be friendly, but came across as taunting, amusement at our expense–so we turned back.  A dugout canoe silently glided through the reeds on an inlet cut off from the Lake by only 25 meters or so.

Back at the hotel we ordered our dinner for room service.  Once again the kitchen surpassed my expectations.  I wished Kachere were closer to Lilongwe. 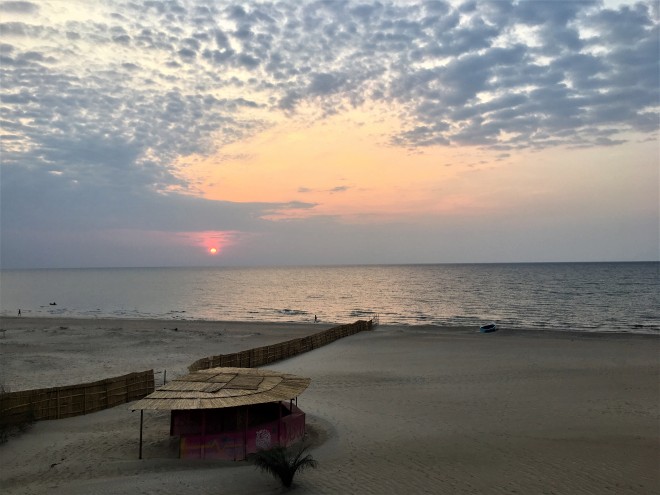 The next morning I woke early to my alarm; I wanted to watch the sun rise over the Lake.  I went up to our private rooftop to watch the sky lighten on the water’s horizon.  The only sounds were the lapping of the waves, birdsong, and a breeze lightly caressing the leaves of a nearby large mango tree.  To my left, just past the hotel property, I could make out small fires on the beach and the stirrings of the village.  Fishermen were already out on the water.  After the sun had poked through the clouds on the water’s far edge, I went down to our balcony to close my eyes and meditate.  Then I crawled back into bed for another hour.

As our next destination was only 10 minutes down the road, we stayed at Kachere as long as we could, enjoying the novelty of a pool to ourselves.  We then packed up the car and head to Kande Horse, another property that had long been on my Malawi bucket list.  C loves horses but there are few stables where the casual guest can ride.  One is on the Zomba plateau and the other at Kande Horse.

We were quickly settled into our room, had some lunch, and then prepared for our included one hour afternoon ride to the lake shore.  I appreciated the incredible welcome afforded us by the Kande Horse management and staff, and the care taken in selecting our horses.  C and I are casual riders, who though we try to get a horse ride in on about every other holiday, still have little real horse experience.  C was pleased to have her own good sized pony, and no one to lead her.  As luck would have it, it turned out to be more than an hour’s ride.  Let’s not kid ourselves here, we sit on horseback and they walk, we are not trotting or cantering, but I guess its still riding, right?  Our route, through villages, forest and brush to the beach was both pleasant and calming, with just enough cheeky misbehaving by the horses, to make us laugh. 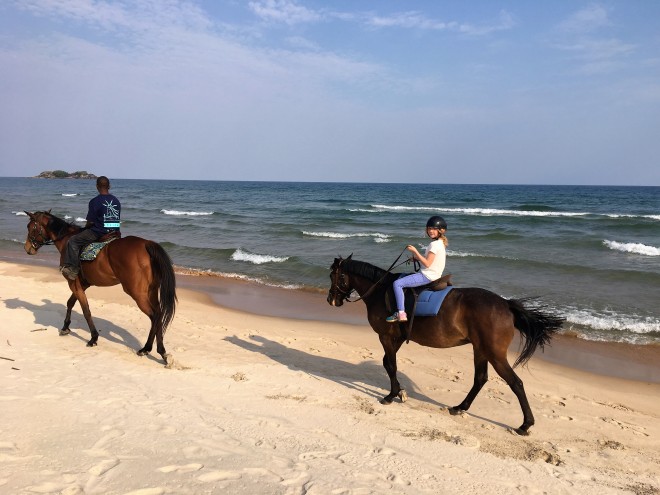 C riding along the lake shore

However, once at the beach we had to wait for the other riders, who had taken a longer ride, to arrive and frolic in the waves.  The beach was crowded, mostly with children.  A community project was underway.  If I understood correctly, a donor had provided money for bricks to build a classroom at the school; the community needed only to provide the cement and the labor, and thus they were collecting sand from the beach.  However, they were nearly done for the day when two mzungu rode up on horses, dismounted, then sat waiting.  A perfect time to surround them and pepper them with questions.

After a rather uncomfortable 20 minutes, the other riders showed up and we headed back to Kande Horse.  Again, there was little to do but relax around the room, our balcony, or the grounds until it was time for dinner at 7 PM.  Again, no Wi-Fi, no electricity until evening, so we kept things low key.  I was a little worried about dinner as I had learned on arrival that all of the meals are solely vegetarian.  But honestly, it turned out to one of the best dinners I have had in Malawi.  The veggie burger and fries were really delicious (I wish I had the recipe), and the camaraderie around the table warm and easy.

Initially we had planned for a second night at Kande; however, C was ready to go home.  To be honest, I was too, but I would have stayed if C wanted to.  But after dinner she asked if we might go home early.  I was incredibly grateful for the management at Kande for their understanding.  Therefore after breakfast on Saturday we packed up the car and made the five hour drive back to Lilongwe.  It was a long drive, but somewhat comforting just being behind the wheel.  The days at the Lake had restored at least some of my equilibrium.