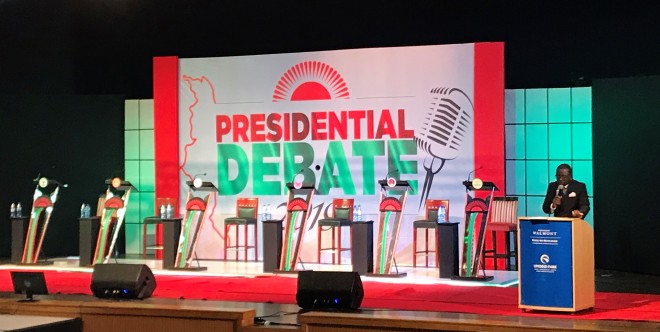 The stage is set for the third and final Presidential debate

I generally do not blog about my job.  Not that I do not have an interesting one, I do, but my blog is instead about myself, my daughter, our travels, our life abroad.  And my job enables much of that, but its not all I am about.  One thing I like to write about though is what I see around me, the everyday of Malawi.  And right now my job and the everyday are one and the same.

I am a political officer, so my job is to understand the political situation in a country – how the structure of government, the methods of decision making, the form of representation, the formation and implementation of policies come together to shape the country and its domestic and international relationships.  As a traveler, I have always been intrigued by more than just the tourist sites, but also the interplay of history, politics, and culture.  Elections brings politics front and center and give one a fascinating peek into the character of a country.

Malawi will hold its general elections on Tuesday, May 21.  Ten days from now, Malawians will go to the polls to elect their President, Parliamentarians, and Local Councilors.  This will be their sixth democratic election.  And I am here to see it happen.

Actually, this whole shebang has been unrolling since I landed in Malawi.  Within weeks of my arrival in August 2017, the Malawi Electoral Commission (MEC) held six by-elections for parliamentary and local councilor seats that had been vacated.  Already, the rivalries for 2019 were on display.  Like the good ole U.S. of A, Malawi starts campaigning real, real early.

With my observer identification, I had an opportunity to visit several polling sites to observe the process.  Although I have voted in a good many elections in the U.S., I have almost always, by nature of my nomadic overseas lifestyle, done so by absentee ballot.  On only three occasions have I voted in person and two were small local elections.  In 2008, I voted in person in a presidential election.  At the time I lived in Washington, D.C., and I found it thrilling to stand in a line that spilled outdoors and around a corner.  For the first time I truly felt the thrill of exercising my right to vote.  Watching Malawians do the same was at least equally exciting, perhaps more so given how much more Malawians have to go through in order to vote.  There is no early voting, no absentee ballots.  Polling stations are often at schools, many in poor shape.  October is hot and dry, there may be little or no shade.  Though these were just by-elections in a few constituencies, and turnout was not high, I was nonetheless impressed, even moved, by those who made the considerable effort to vote.

As the pre-election season continued I attended many election-related events.  The MEC launched its electoral calendar; I was there.  Some government events turned into political rallies; I was there.  After April 2018 by-elections in the southern district of Mulaje turned violent, the Multi-Party Liaison Committee, a district-level conflict management group made up of district election officials, traditional chiefs, political party representatives, local police, and more, met to hash out what happened; I was there.  When the current Vice President defected from the ruling party to launch his own; I was there in the crowd.  And when the People’s Party held its convention and re-elected former Malawi President Joyce Banda to lead the party again, there I sat, just one row behind her, the only mzungu (“white person” in Chichewa) in the audience.

As the country moved into its voter registration exercise (prospective voters cannot register whenever they want but only during specific two-week timeframes in their respective constituency), I too had the opportunity to observe the process. 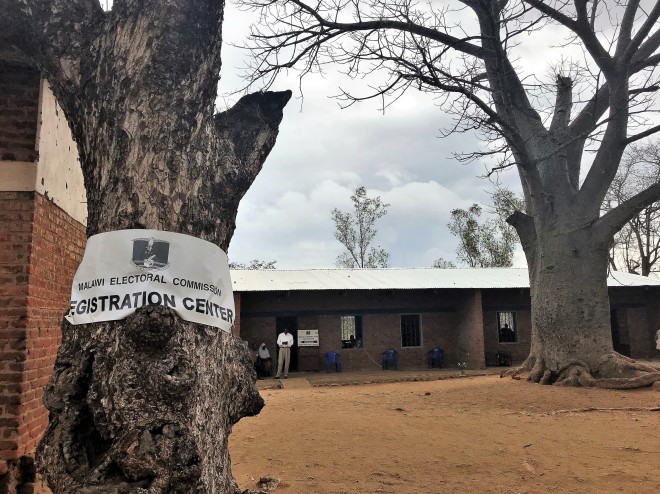 I was thrilled to be in the audience at the final Presidential election, the signing of the national peace pledge by presidential candidates, and attend the National Prayer Breakfast held at State House, the equivalent of the U.S. White House.  I have met in person two of the presidential candidates (the President of Malawi and the leader of the Malawi Congress Party), the former President Joyce Banda, and the wives of the Health Minister and the current Vice President (both accomplished women in their own right).  Sometimes I have to pinch myself.

There is so much excitement and pageantry in Malawian elections.  While in the U.S. we have a two-party system, in Malawi there were 52 registered parties at the beginning of this election season.  In reality, many of those are small “briefcase” parties, but there are seven running for President (one Independent) and 14 contesting parliamentary seats.   Supporter clothing is vibrant, and often in traditional fabric called chitenje; its so much more than just red and blue.

I feel incredibly privileged to be here in Malawi at this time, to watch a young and vibrant democracy in action, in a country that serves as a model in the region and the continent.  It is of course my job to cover these issues, and as such I have had greater access than most, but my interest goes beyond my career.  This is history in the making and the outcome — no matter who wins (and its anyone’s game at this point) — will shape this country for years to come.