Every so often I dip into the email stories I wrote during my pre-State department, pre-mom travels.  I review, edit, and re-package them.  In the summer of 2004 after completing my six-month research assistantship at the Pacific Forum-CSIS in Honolulu, Hawaii, I embarked on a three-week trip to the Big Island, Rarotonga in the Cooks Islands, and then Samoa.  After the trip I would participate in my assistantship final seminar, graduate from my Master’s program, and start looking for work.  I figured this trip would be my last hoorah for some time, as I would soon join the world of government work.  The trip would inspire me in ways I had not expected, and eventually led to my first published op-ed and my second published academic article, both on Chinese influence in the South Pacific.  My stories are sometimes far more about the vagaries of travel – the transportation hiccups, the interesting people one meets on the road, and unexpected adventures – than about the places themselves.

My flight left Honolulu for Hilo, on the eastern side of the Big Island, at 10 in the morning and landed an hour later.  I was at the hostel by noon.  As it was a Sunday, there was little to do in Hilo, with most shops closed.  I only walked around a little, had some lunch, and did some grocery shopping.

I met another woman at the hostel who struck me as odd.  She was from north central England, with a thick accent I could barely understand.  What really struck me is her plans to travel around the world for a year.  When I asked her about restaurants near the hostel, she told me she did not know because, as she said, she “did not eat foreign foods.”  I wonder how she will ever survive her trip.  I would love to run into her a year from now and see how she faired.

On Monday I was up early, trying to figure out what I would do that day.  I was thinking maybe a helicopter ride over the volcano, but was still unsure I wanted to pay the price.  I thought perhaps I might rent a car and drive around on my own or to Mauna Kea, but I learned that to return a car to Kona, on the other side of the island (a whole 2.5 hours away), I would be charged an additional $85 for the drop-off charge; and one cannot drive to Mauna Kea in a rental car because the road is bad and the tour companies forbid it.  A rival hostel in town offered stargazing tours to Mauna Kea for the incredible price of $96, even though the stargazing program on the mountain is actually free!  The idea of them raking in nearly $1000 for 10 people with only the cost of gas there and back, perhaps $30 for a van, made me a feel annoyed and I was thus reluctant to give them a call.

On my first day I had met Carmen, a paramedic in the German army; she also wanted to go to Kona.   After two 6-month tours in Kosovo she was granted this five-month holiday.  She asked me what my plans were for the day, suggesting we could go to Kona together.  However, after the unfortunate news from the rental car agencies, we sat wondering what was best to do.  There is but one bus on the island that travels from Hilo to Kona once a day, from 2:30 arriving about 5:30.  It seemed I would have no plan for Monday and much of Tuesday would be spent on the bus.  I was beginning to think my five days on the Big Island would be a total bust.  Then in walked Sharifa – another woman staying at the hostel – doing her masters in Environmental Science at Yale and studying tropical plants, with field research on the Koa tree in Volcano National Park.  More importantly, Sharifa had a rental car, was driving to Volcano National Park, and then onto Kona to renew her car at the airport there.  And she asked if we might like to go along.   Carmen and I practically leapt to our luggage in a single bound to begin the frantic packing.  Sharifa said she would meet us outside in the parking lot across the street.  Packing was done in record time and soon Carmen and I and our bags were cozily ensconced in Sharifa’s beautiful black convertible and we were motoring down the road.

Because Sharifa needed only to pick up a research permit at the Volcano National Park, we had only 30 minutes in the visitor center and a walk on a short trail overlooking one of the craters.   The rich volcanic soil and the high elevation create a lush rain forest atmosphere, and where there are rain forests, there is most certainly rain.  And it rained.  The clouds rolled in across the crater and it disappeared in the fog.  It grew cold and we huddled for some time with warm drinks near the fireplace at the Volcano Inn and looked at the photographs of magnificent eruptions, which lined the wood walls.  Sharifa needed to get her permit and be in Kona to renew her car rental before 5 o’clock and so we piled into the car and headed off.

Once we were some ten minutes out of the park, the sky cleared, the convertible top came down, the CD player was turned up, and we barreled down the road in high spirits.  On one side of the road dark grey glistening volcanic rock sloped upwards to the clouds heading for the peak of Mauna Loa.  On the other side the same moonscape rock dropping downwards towards the sea.  A fascinating landscape with sometimes dramatic vistas appearing before us of the dark blue sea alongside cooled coal-grey igneous rock.  At times it grew cool and would sprinkle some rain and the top would go up on the car.  The wind would pick up and we would feel chilly.  Not exactly the weather one might expect in Hawaii, but the Big Island temperature and climate is amazingly diverse.  In the winter, even the peak of Mauna Kea is covered in snow while the beachside with be basked in warm sun and temps in the 80s. 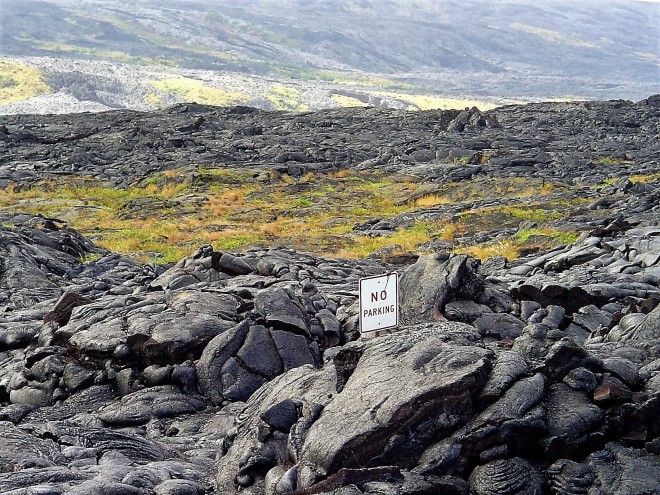 As we bid Sharifa farewell at the airport, I made a reservation for my own rental car the next day.  This was a big deal for me as I could not recall the last time I had driven a car.  The Kona hostel, located in a residential area, was not easy to find because there was not a sign at all.   The manager had a weird laugh after just about everything he said.  He was young, around 30 years of age, and although he laughed, he did not seem pleasant.  Carmen immediately told me in the room she did not want to stay there another night.  I also felt bad karma from that guy.  The hostel was new and clean, but the guy made the whole thing feel like an episode of the Twilight Zone.  Carmen and I walked down to the supermarket to get fixings for dinner and spent an early evening in the hostel reading, showering, watching tv, and eating.

We were up the next day to head over the airport to pick up the rental car.  We were out of the hostel before 9 am; we did not say anything to the manager as we left.  The tricky part was getting to the airport.  Although just seven miles out of town, there is no bus because, of course, America.  We tried to flag down a taxi but the first one told us we had to have a reservation.  We asked if he could call in and tell a taxi to pick us up and he said he would, but 15 minutes later and two taxis had passed us in the opposite direction without turning around or stopping.  So, we walked to a gas station.  We asked the woman behind the counter if she would call for us and she did, but it turned out that one company was so busy they were not picking up their phone, the other said it might be an hour.  I thought of Mr. Weird Manager back at the hostel and kept checking my watch.  I had a feeling he would not like it if we checked-out AFTER the check-out time.  There was a man standing in line next to us and I asked him if he was heading by the airport and if he could give us a lift.  A minute later he signals us from the car a thumbs up and Carmen and I get in.

A line awaited us at the rental car counter.  We were back at the hostel by 10:15 to find the door to the hostel locked and neither of our keys working.  Suddenly Mr. Weird pops up from nowhere behind us and in an unfriendly tone tells us our keys will not work.  He opens the door telling us he had already removed our things from the room because of the 10 AM check-out time.  He makes an unpleasant comment about the amount of luggage we have, followed by his disturbing laugh.  He even helps us to take our luggage to the car, but not out of any kindness I am sure.  He seemed quite eager to be rid of us, and Carmen and I felt quite happy to pull out of the drive and see the back of that guy.

Lava pouring into the sea

We headed back to Volcano National Park and drove around the crater road stopping to take pictures of the lava flow formations, of steam rising from craters, and sniff the sulfuric air.  The air was cold, the sky grey and overcast.  Light misty rain fell.  However, as we drove down Chain of Craters road towards the sea, the clouds disappeared and the blue sky and sea appeared below.  It was a beautiful drive.  The sides of both roads were covered with undulating hard lava flows from the past several decades.  The sight was almost surreal.  The ocean was the most incredible blue.  At the bottom of the road, alongside the sea we parked our car.  The road once continued along the ocean, but with the more recent lava flows it had been closed.  We walked over the hard lava on the road, occasionally coming across buried road signs.  At the end of the pedestrian trail, where visitors could proceed no further as the lava, though grey and cooled was nonetheless still molten under its crust and still inching toward the sea, we could observe the red-hot lava pouring into the sea.  Great billows of steam rose up as it dripped off the island into the sea.  Here I was standing just 100 feet from an active lava flow.  Incredible.