The continuation of my “last hurrah” whirlwind three week trip to three Pacific Islands.  This is the second part of the Big Island — when my German travel companion Carmen and I finally stopped screwing around, finally figured out our transportation issues, and started to actually see some of the sights. 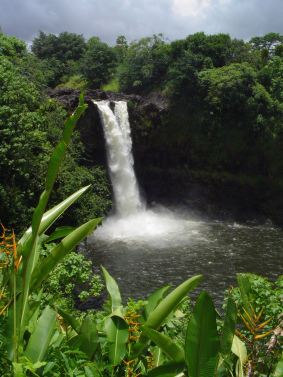 As Carmen and I drove back up from the lava coast, the clouds descended around us again, and dusk descended.  We drove to the small town of Volcano, a lush rainforest oasis of deep green ferns and dark red flowers engulfed in a light mist and chilly fog.  We planned to stay the Holo Holo Inn but had no map with it on, and with the growing dark and fog it was difficult to see the road signs.  We stopped in the small general store to ask directions.  The store had a very small town feel to it; a real general store stocked with just about every necessity.  Not a huge selection mind you, but enough for the artists who live in the area to not have to drive far for groceries.  I asked the woman behind the counter if she knew where I could find the inn.  She said she didn’t know.  But the tall white-bearded man who had just made his purchases, and was on a first name basis with the woman, told her she surely did.  He said it was just off the road near the Japanese school, and he says some Hawaiian road names.  She disagreed and said it is off another road.  He kindly tells her she is wrong and proceeds to tell us how to get there.  The woman good-naturally laughs at herself for not knowing the location.  The whole conversation had that warm feeling that comes from people in a small town knowing each other well, of regulars and long-time store proprietors joking with one another.

As Carmen and I drove up to the wooden house next to the Japanese school, it seemed dark.  The front driveway was littered with all kinds of garden and mechanical tools.  Carmen took one look at the place and said maybe we should just go.  It did seem almost deserted.  But when we rang the bell, the door was opened by a small blonde boy followed by a young Asian woman with delicate features.  In heavily accented English she welcomed us inside and showed us around.  The place was really beautiful.  All made of rich warm wood.  Wooden floors, walls, and ceilings.  Though it was chilly outside, it was a nice temperature inside, enough for bare feet upon the floorboards.  Our wooden bunk beds topped with heavy warm blankets.  The kitchen had a high ceiling, with large Japanese paper lamps hanging from the ceiling over a wooden table.  The cupboards were well stocked with beautiful Japanese ceramic plates, bowls, and cups – all for the hostelers use.  It felt very homey.

On my fourth day on the Big Island we drove the rest of the way around the stopping to see many sites along the way.  The weather outside of Volcano was gorgeous.  Warm, crystal blue skies.  We drove first to Lava Trees State Park.  The lava “trees” were formed when a volcanic eruption some 200 years ago swept through the forest.  The lava climbed up the trees burning them but then hardening in the shape of the former tree trunks- making hollow lava cones of varying heights.  The drive, once we found the tricky turn, was gorgeous.  Huge trees on both sides dusting the two-lane road with leaves, and just a touch of sunbeams filtering through.  It felt a bit more like a drive in New England than in Hawaii.  The forest itself seemed almost primordial with tall, old, moss-covered trees.  A short circle trail led us around the ghostly lava trees.

We headed next to Rainbow Falls just outside Hilo.  The falls were absolutely beautiful – perhaps one of the best falls I have ever seen.  They were tall and thick, falling into a lush pool at the bottom, with a large cave behind them – supposedly the one-time home of the goddess Maui.  At the top of the falls, just before the water gushed over the edge, there was a large boulder which split the falls into two ribbons of water.  In the early morning or afternoon, if conditions are right, there is often a rainbow across the water, but unfortunately, we were not there at the right time.

On next to Akaka Falls State Park via a 4-mile scenic drive.  At the falls we were rewarded with two falls, much taller than Rainbow falls, though thinner as well.  At the top of the trail to the falls we sat at a picnic table and had our lunch of bread and cheese and fruit.

On next to Waipo Valley lookout.  The drives were not long, perhaps an hour here or an hour there, but very pleasant.  At the Waipo lookout we stood on a cliff above the Waipo Valley and the sea, with a tremendous view of the undulating cliff coastline, the sparkling sea, and the beginning of the low valley.  There are some good treks and horse riding in the valley but they are costly, so we did not have anything planned.  But seeing the view was worth the drive.

We then drove through the town of Waimea with a magnificent view of Mauna Kea rising in the background, it dwarfed everything else on the island, rising quickly to its height of 13,800 feet.  The road ended at the town of Hawi, where the original statue of King Kamehameha the Great, the first king to unite the Hawaiian Islands – born on the Big Island – stands. (And in one of those amazing coincidences of life, I happened to be watching Hawaii 5-0 while editing this story, and the episode happened to be one in which they feature this original statue.  I was thinking, I just read about this…in my own story!)

Then we drove along the coastal road another hour to the Pineapple Park Hostel to the town of Captain Cook (where the famous navigator who discovered the Sandwich, or Hawaiian Islands, met his end).  Carmen and I stepped into the reception area of Pineapple Park at 8:30 pm.  The office was closed but there was a sign saying to ring the bell for after-hours arrivals.  Unfortunately, on the other side of the shuttered reception window was another sign indicating the hours were 7am to 7 pm and that THIS IS HAWAII – WE ARE NOT OPEN AT ALL HOURS.  The sign did not inspire confidence as I hesitantly pushed the bell and cringed.  A Japanese woman came from the hallway behind us, saying in a decidedly unwelcome tone “What do you want?”  I explained we wanted to stay.  “How many of you?”  The two of us were standing right in front of her…Of course, she made a point of telling us the usual hours are 7 to 7 and made such a case out of it as if we were really being a bother and she was being tremendously nice to let us stay.  I had a hard time not rolling my eyes.

On the wall of our room was a list of the hostel rules.  Some made some sense, some I found a bit humorous (copied word for word):

You will be asked to leave on the first violation – ALOHA

I had to crack up at the “ALOHA” in capital letters at the end of the list.  I hardly felt the Aloha Spirit emanating from this hostel.  What would happen if I haven’t had a chance to do laundry (i.e. have dirty clothes) or I do not fit in with the others?  And the five-minute shower?  Well, without the lock or even being able to close the shower door completely, I imagine I will be taking the quickest shower ever.

Hanging with some Hawaiian tiki friends

On the morning of the fifth day, Carmen and I woke up early to head out to swim with dolphins.  There was a small bay a short drive away where dolphins were often spotted swimming.  I did not really feel comfortable swimming with dolphins, but I thought it might be nice to see them.  Besides, I knew in the water I would not have my glasses and would probably not see a dolphin at all.  At the bay, a man pointed out some dolphins in the water.  I didn’t see any dolphins, only human beings floundering about in the bay.  But I took his word for it.  We entered the bay from a rocky shore; I am talking about mini boulders.   They made it difficult to get in the water.  We nearly fell a couple of times.  Carmen pulled on her snorkeling mask and paddled off.  I stood waist high in the surf, feeling the pull of the waves as the water rushed back to the sea.  It was a strong pull, nearly pulling me off balance.  The crashing in of the waves was also strong.  I tried to stand my ground.

Seemingly out of nowhere, a large wave knocks into us both.  I was tumbling underwater over and over.  After some 20, 30 seconds, I do not know how long, I stood up.  I called out to Carmen to see if she was okay, she was also calling for me.  Her flip-flops floated by.  Even my strapped sandals had been ripped off forcibly by the wave.  I think my hair was standing straight up, matted with sand.  There was sand in my ears.  Later I found a pound of sand pushed into the top of my swimsuit.  Carmen and I both agreed our little foray into the ocean was over for the morning.  We violated the five-minute shower rule back at the hostel.

Our next, and last, sightseeing stop was the Historical National Park Pu’uhonua o Honaunau (which means Place of Refuge at Honaunau).  This was an area where the Hawaiian ali’i (royalty) lived.  It was also a place where those who broke the strict rules of traditional Hawaiian conduct might find redemption – after swimming across shark infested waters.  In times of war, women, children, those unable to fight or wounded soldiers could also find refuge here.  In times of war in Hawaiian times all people were considered fair game in battle, and only those located in compounds of sacred refuge could be spared.  Sounds brutal. 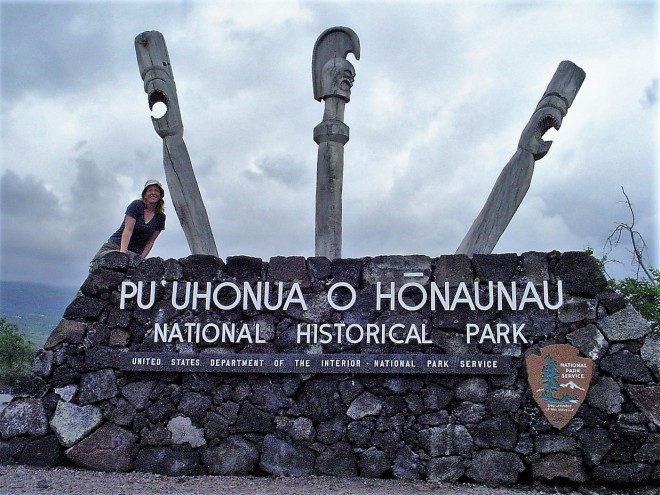 Nowadays the Historical Park is peaceful.  The wall of the compound is all that still exists from traditional times beside white sand, a glittering sea, and reconstructed straw huts.  In one large boat house, an old native Hawaiian carves the traditional totem or Ki’i that guard the entrance to the landing lagoon reserved only for ali’i, and the site of some reconstruction, from evil spirits.  In the small lagoon a sea turtle swam around, another basked in the sun.

The following day I took Carmen to the airport and return the rental car; we said our farewells (though we remain Facebook friends to this day).  Later the same day, I embarked on my own flight away from the Big Island, leaving behind a magnificent view, but looking forward to the next leg of my journey….